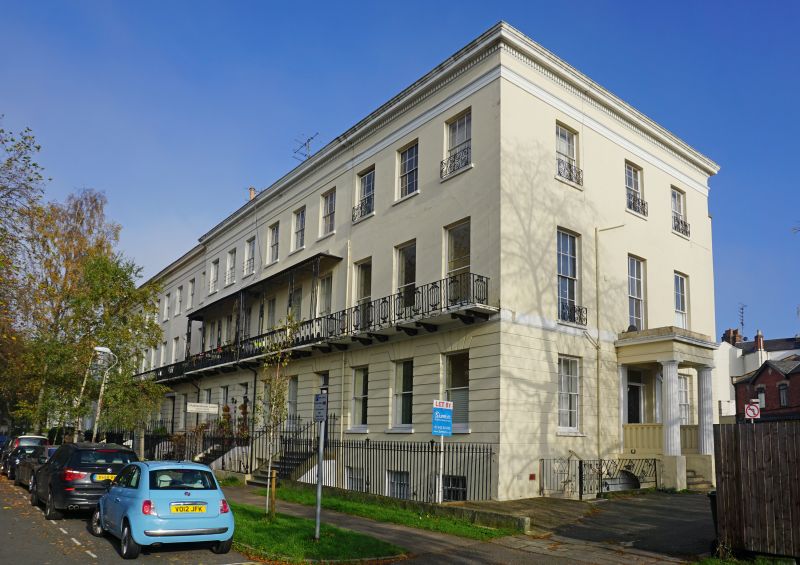 Terrace of 7 houses, now flats and hotel, and attached area
railings to Nos 1-9 (odd). Numbered right to left, described
left to right. 1833-4 by Robert Stokes, architect. Stucco over
brick with concealed roof, brick and stucco party wall stacks
and iron railings and balconies.
PLAN: mainly side entrances and with service ranges to rear.
EXTERIOR: 3 storeys on basement, and single-storey entrance
bay to left, 19 first-floor windows (3 per house, except No 15
has 1). Stucco detailing includes horizontal rustication to
ground floor with voussoirs over openings and first-floor
band; crowning architrave, frieze and dentil cornice with
blocking course. Mainly 6/6 sashes where original, house to
left has one tripartite window to each floor, 2/2
horizontal-pane sashes to ground and first floors, 6/6 between
2/2 sashes to second floor; basement has 8/8 sashes where
original, all in plain reveals and with sills. Entrances (4 to
left and 2 to right and to right return): flights of
roll-edged steps to 4-panel doors, with overlights, some with
margin-lights, that to left set back in solid porch with
pilasters, frieze and cornice. Right return: 3-window range;
central entrance in distyle fluted Doric porch, within are
4-panel, studded double doors with overlight, solid arcaded
balustrade to sides of porch. Left return has blind windows
and 6/6 sashes.
INTERIOR: retain original joinery including panelled shutters
to some windows, and original plasterwork including cornices
and ceiling roses; otherwise not inspected.
SUBSIDIARY FEATURES: continuous balustrade, except to right,
has anthemions and embellished rods, derived from Henry Shaw's
design for Upper Woburn Place; Nos 3 and 5 have verandahs with
anthemions to uprights and tent roofs and with openwork frieze
to No.3. Ornate low balustrade above porch. Area railings and
gates and railings to sides of steps have spearheads with
covered vase finials to stanchions. Right return has scrolled
window boxes to second floor.
HISTORICAL NOTE: Built as part of the development of this area
undertaken for Joseph Pitt in 1825-42, the general layout
being designed by the architect John Forbes. Stokes had bought
Nos 1 and 7; No.9 was to be built of 'of such elevation as