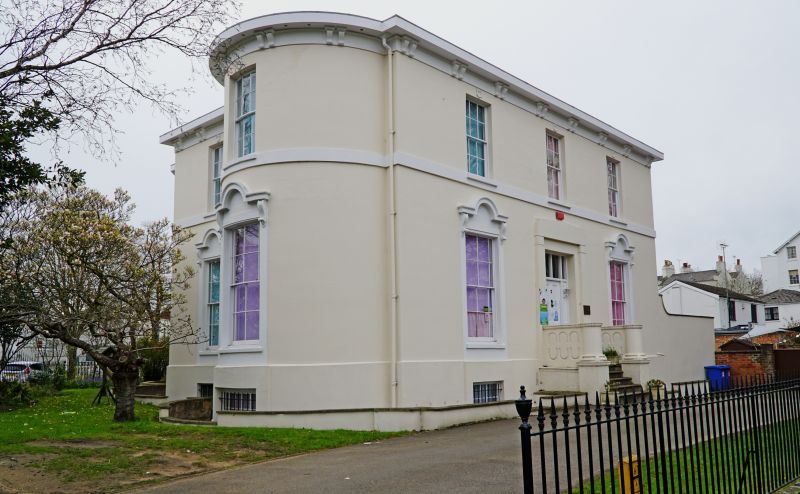 Villa. 1839-40. Edward Cope, builder. Stucco over brick with
hipped slate roof with 2 rear stucco stacks.
EXTERIOR: 2 storeys on basement, 3 first-floor windows. Stucco
detailing includes tooled architraves to ground-floor windows
with broken segmental pediments on corbel brackets;
first-floor sill band; wreath above each first-floor window;
crowning cornice on paired console brackets. 6/6 sashes
throughout, all in plain reveals and with sills; renewed 8/8
sashes to basement. Central entrance, flight of 5 renewed
roll-edged steps to 4-raised-and-fielded-panel door with
sidelights and divided overlight in tooled architrave. Left
return: 3 first-floor windows, each in stepped-forward range
and that to right in full-height bow. 6/6 sashes, those to bow
are curved on section and similar stucco detailing.
INTERIOR: noted as having retained original joinery including
panelled shutters.
SUBSIDIARY FEATURES: to sides of steps a stuccoed balustrade
with blind oval motif and cylindrical end piers.
HISTORICAL NOTE: the NW side of Prestbury Road was built upon
first as part of the development of this area undertaken for
Joseph Pitt in 1835-42, the general layout being designed by
the architect John Forbes. Built by Edward Cope, a leading
local builder and speculator who was responsible for laying
out the area around Pittville Circus, it was sold in March
1847 to John Bird of the East India Company for »2060.
Originally known as Alwington Villa.
One of a good group of villas, along with Southend House
(No.32) (qv), and Tower House (qv), Prestbury Road and Nos 1
and 2, Pittville Circus (qv), at the important junction of
Prestbury Road, Wellington Road, Albert Road and Pittville
Circus.
(Blake S: Pittville: 1824-1860: Cheltenham: 1988-: 19-20,74).