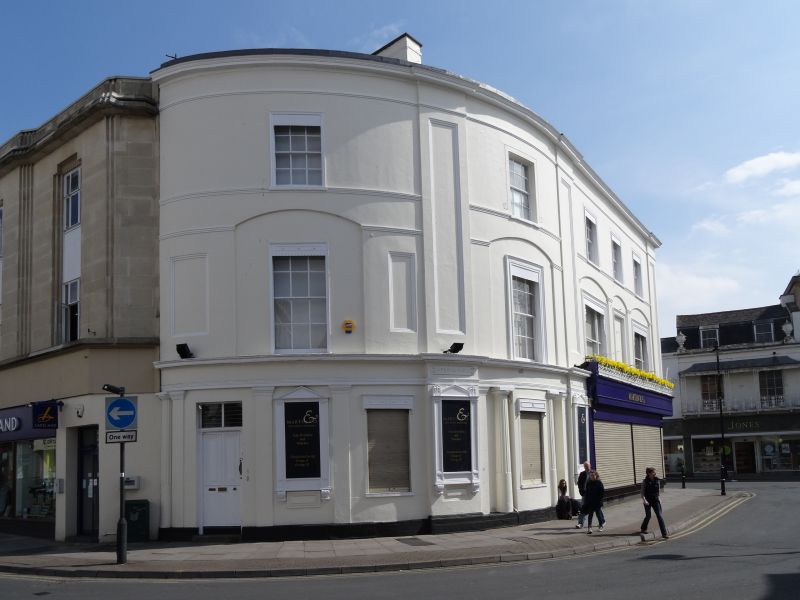 of Messrs Martin, Baskett and Martin, Jewellers and
Watchmakers to the Queen', the shop having 'two frontages of
chaste and elegant design'.
The Promenade was laid out in 1818 as a tree-lined avenue
connecting the Colonnade in High Street to the Sherborne Spa
(on the site of the Queen's Hotel qv), by 1826 it was a
carriage drive with spacious gravelled walk on each side.
Buildings on the NW were the first to be developed. Although
originally on either side were 'rows of elegant houses,' by
1845 Rowe noted that 'nearly the whole of the left-hand (SE)
side .. is devoted to professional or business
establishments'.
Occupies an important corner site on the Promenade at the
junction with Imperial Circus.
(Chatwin A: Cheltenham's Ornamental Ironwork: Cheltenham:
1975-1984: 29,51; The Buildings of England: Verey D:
Gloucestershire: The Vale and The Forest of Dean: London:
1970-: 146; Williams GA: Guide Book to Cheltenham: 1824-: 29;
Rowe G: Illustrated Cheltenham Guide: Cheltenham: 1850-1969:
12).