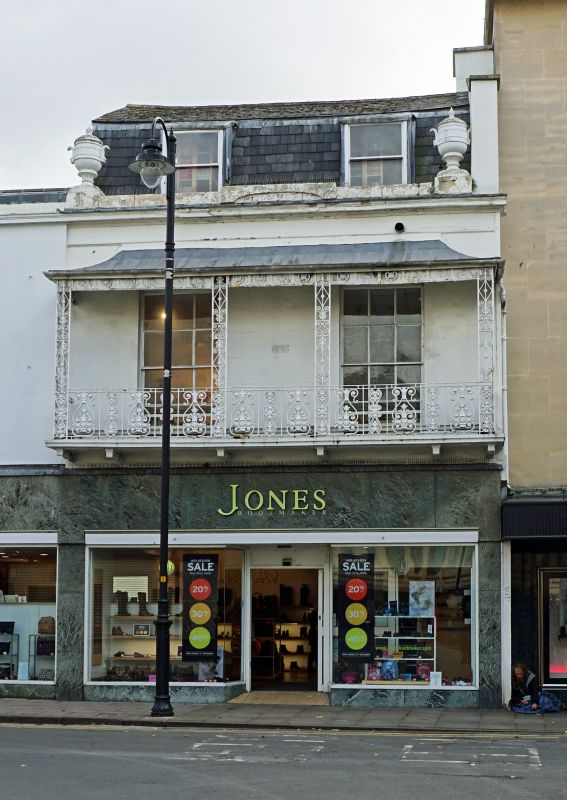 Library, now shop. c1820-40 with later alterations including
c1980s ground-floor shop front. Stucco over brick with mansard
slate roof and iron verandah.
EXTERIOR: 2 storeys, with attic to mansard, 2 first-floor
windows. 6/6 sashes where original, taller to first floor.
Attic has 1/1 sash. Cornice surmounted by parapet with 2 urns.
Glazed shop front.
INTERIOR: not inspected.
SUBSIDIARY FEATURES: balustrade at first floor possibly by
Marshalls, the motif derived from LN Cottingham.
HISTORICAL NOTE: by 1845 when Rowe's Cheltenham Guide was
written (published 1850), this was Wright's Theological
Library. Rowe noted, 'Theology has now become so necessary a
part of polite education, that libraries are formed in most
towns for the use of those devoted to its study. This library
contains all the most useful works on this subject, together
with a miscellaneous stock of standard literature.' The facade
remains the same from the first floor, the ground floor has
paired end Ionic columns and a central entrance with fanlight
between 2 round-arched windows.
The Promenade was laid out in 1818 as a tree-lined avenue from
the Colonnade in the High Street to the Sherborne Spa (on the
site of the Queen's Hotel (qv)), by 1826 it was a carriage
drive with spacious gravelled walk on each side. Although
originally on either side were 'rows of elegant houses,' by
1845 Rowe noted that 'nearly the whole of the left-hand (SE)
side .. is devoted to professional or business
establishments.'
Nos 28 and 30 (qv) together with No.32 form a single
commercial unit at Review.
(The Buildings of England: Verey D: Gloucestershire: The Vale
and The Forest of Dean: London: 1970-: 146; Williams GA: Guide
Book to Cheltenham: 1824-: 29; Rowe G: Illustrated Cheltenham
Guide: Cheltenham: 1850-1969: 13 (ILLUS)).