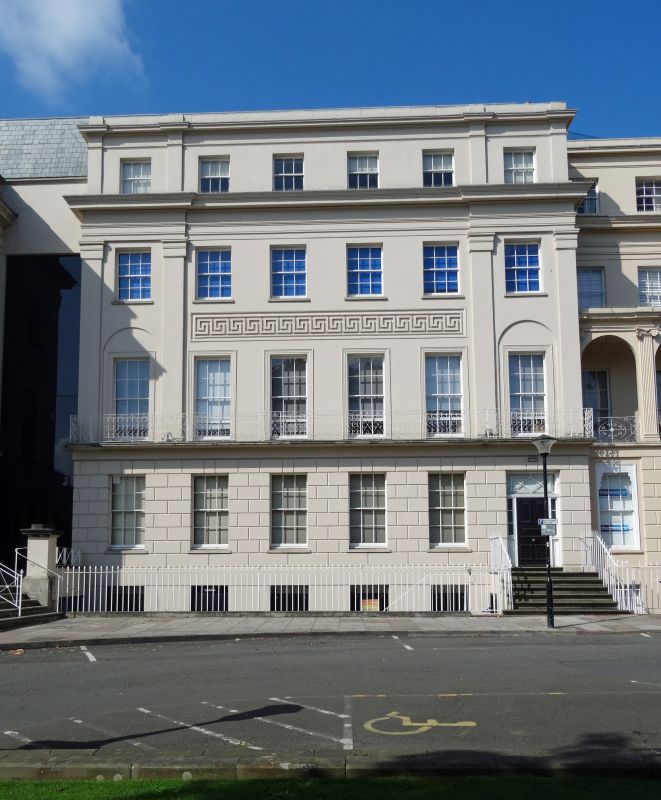 Front wall to office block. 1823, heavily restored in 1920s to
balance right wing of Nos 47-83 (odd), Municipal Offices (qv),
(1823). Stucco over brick with concealed roof and iron
balcony.
EXTERIOR: 4 storeys on basement, 1:4:1 first-floor windows.
Stucco detailing includes ground-floor rustication and
cornices over 2nd and attic floors. End bays break forwards
and are framed on upper floors by pilasters. First-floor
windows have tooled architraves, those to ends in taller,
wider, round-arched recesses. Between first and second floors
a band of Greek key ornament. Mainly 6/6 sashes, with 3/3
sashes to third floor. Entrance at right, flight of steps to
4-panel door with sidelights with glazing bars and overlight
with lozenge glazing.
SUBSIDIARY FEATURES: continuous balcony to first floor.
Included to complete the terrace Nos 47-83 (odd) (qv).
HISTORICAL NOTE: The Promenade was laid out in 1818 as a
tree-lined drive to the Sherborne Spa (on the site of the
Queen's Hotel qv) from the Colonnade in the High Street, by
1826 it was a carriage drive with spacious gravelled walk on
each side. Buildings on the NW were the first to be developed.
Completes the terrace Nos 47-83 (odd) Promenade (qv).
(Chatwin A: Cheltenham's Ornamental Ironwork: Cheltenham:
1975-1984: 29; The Buildings of England: Verey D:
Gloucestershire: The Vale and The Forest of Dean: London:
1970-: 146; Williams GA: Guide Book to Cheltenham: 1824-: 29).