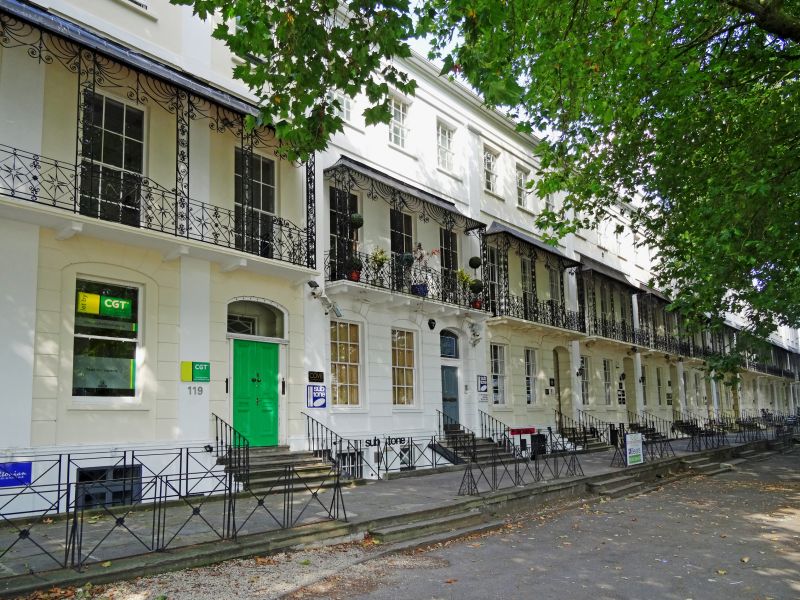 Includes: Nos.6 AND 8 ST GEORGE'S ROAD.
Terrace of 13 houses and attached railings, now offices and
shop with flats over (Nos 2 & 4 St George's Road now part of
No.99 Promenade). c1830-40, Nos 109-119 completed by 1834,
with later additions and alterations including those of c1970s
to rear, No.99. Stucco over brick with slate roof and brick
and stucco party-wall stacks, some rear stacks; wrought-iron
verandahs and railings.
PLAN: a symmetrical terrace with end breakforwards and central
raised parapet and pediment and full-height service ranges to
rear.
EXTERIOR: 3 storeys on basements with attic storey to Nos 107,
109 and 111, and to No.99 at return, 39 first-floor windows (3
per house). Stucco detailing includes horizontal rustication
to ground floor and plain segmental-arched recesses around
windows with voussoirs to heads, full-height Doric pilasters
which interrupt second-floor band; crowning entablature.
Pediment over central house (No 109) and parapet to either
side, all with sunk panels. 6/6 sashes where original, taller
to first floor, in plain reveals and with sills. Attics to
left return in raised parapet have 3/6 sashes. Basements have
3/6 sashes. Entrances to right: flights of roll-edged steps to
4-panel doors and double doors with tooled wooden doorcases
and deep cambered-arched overlights; within are 4-panel,
part-glazed doors with sidelights and overlights with
decorative glazing bars. Further entrances to basements,
4-panel doors, some part-glazed, with overlights with glazing
bars. Ground floor at left (No.99) has c1970s shop front.
Right return has 5-window facade with similar stucco detailing
and fluted Ionic columns through first to third floors; first
floor has tripartite 1/1 sashes; second floor has tall 6/6

between 2/2 sashes in tooled architraves and with cornices on
consoles; third floor has alternate 6/6 between 2/2 sashes and
6/6 sashes in tooled architraves.
Rear: mostly 6/6 sashes; some 6/6 sashes with margin-lights
and some 6/6 staircase sashes with radial glazing to heads. To
Nos 99, 101 and 103 the elevations are elaborately treated:
No.99 has full-height bow with second-floor band and crowning
entablature; 6/6 and 8/8 sashes curved on plan; ground floor
has c1970s glazed shop front. Taylor's Tea Shop (No.101) has
sash windows in tooled surrounds and crowning cornice.
INTERIOR: noted as retaining original plasterwork and joinery,
including dogleg staircases with stick balusters and wreathed
handrails where original.
SUBSIDIARY FEATURES: Nos 109-119 have roofed verandahs with
balconies with star and lozenge pattern and uprights with
double-headed anthemion motif, tent roofs. Area railings have
X-motif. Railings to sides of steps have wreathed handrails.
Individual balconies to left return, second floor have star
and lozenge pattern motif.
HISTORICAL NOTE: The Promenade was laid out in 1818 as a
tree-lined drive to the Sherborne Spa (on the site of the
Queen's Hotel qv) from the Colonnade in the High Street, by
1826 it was a carriage drive with spacious gravelled walk on
each side. Buildings on the NW were the first to be developed.
One of Cheltenham's best Regency terraces
(Chatwin A: Cheltenham's Ornamental Ironwork: Cheltenham:
1975-1984: 29,34; The Buildings of England: Verey D:
Gloucestershire: The Vale and The Forest of Dean: London:
1970-: 146; Williams GA: Guide Book to Cheltenham: 1824-: 29).