Numbers 1 to 18 and Attached Area Railings 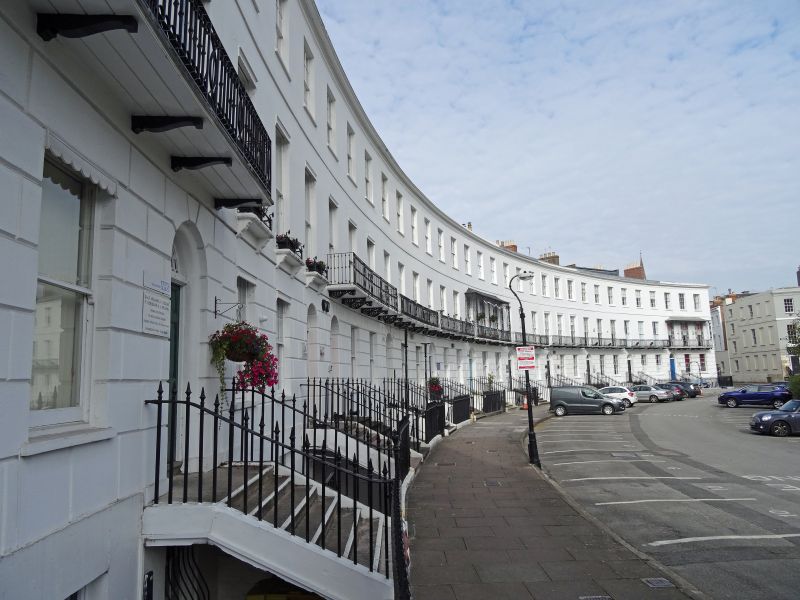 Terrace of 18 houses, hotels and boarding houses, now offices,
surgeries and club, with flats and attached area railings.
Numbered right to left, described left to right. c1806-10 by C
Harcourt Masters of Bath with later single-storey extension to
left; railings and balconies supplied by John Bradley of
Worcester. Developed for Joseph Pitt. Stucco over brick with
double pitch, slate roof; brick and stucco party-wall stacks;
wrought- and iron balconies, verandahs and railings. A
symmetrical, concave terrace of double-depth plan houses with
mainly 3-lower-storey service ranges to rear; staircase hall
to side.
EXTERIOR: 3 storeys and basement, 3 first-floor windows each;
3-window return to left and 4-window return to right. Stucco
detailing includes rustication to ground floors except to Nos
2 and 3; first- and second-floor bands; tooled architraves to
first-floor windows of Nos 4 and 12; crowning cornice. Mainly
6/6 sashes where original, taller to first floor, some 2/2
horizontal-pane sashes; all in plain reveals and with sills.
Basements have 3/6 sashes where original. Entrances: 9 to
right and 9 to left, flights of roll-edged steps where
original to mainly 6-fielded-panel doors with fanlights, some
with batwing and circle glazing bars, all in round-arched
plain reveals. Rear has 6/6 and 8/8 sashes, some tripartite
windows with 6/6 between 2/2 sashes. Right return has 4
first-floor windows; ground-floor rustication, first- and
second-floor bands. Ground floor has 2/2 horizontal-pane
sashes with lugs; first and second floors have 6/6 sashes.
Left return has three first-floor windows and single-storey
outshut, 6/6 and 2/2 sashes.
INTERIOR: original plasterwork and joinery remains to many
interiors. No.12 retains most of its original interior
details: dogleg staircase has stick balusters and wreathed
handrail, fireplaces, cornices with acanthus motifs, reeded
doorcases with corner rosettes, some marble fireplaces, those
to first floor with Classical scene. No.1 has embellished
cornices to hall, ceiling frieze and lion masks, narrow
open-well staircase with stick balusters; No.11 has inner
double doors with wide batwing and circle glazing bars.
Panelled shutters to many windows. Otherwise not inspected.
SUBSIDIARY FEATURES: Nos 1-9 and 11-14 have long balconies

(verandahs to Nos 1 and 6) with sticks and oval panel, with
borders of half-circle and lozenge, the design used on the
second Assembly Rooms and similar to those at Nos 54-60
Winchcombe Street (qv); verandahs have uprights with similar
motifs and openwork friezes. Nos 15-18 have lattice motif
(verandah to No.16 has similar motif to uprights and lattice
frieze). Right return has individual balconies to first- and
second-floor windows with similar rods. One window to
first-floor of left return has individual balcony with lattice
motif. Spearhead area railings, those to Nos 9 and 10
incorporate brackets for oil lamps. Balconies and railings
provided by John Bradley of Worcester. Nos 9, 10, 12, 13, 14,
16, 17 and 18 have scrolled boot scrapers.
HISTORICAL NOTE: built as fashionable lodgings for visitors to
the Spa; the Duke of Gloucester lived at No.18 when he was
visited by Princess Victoria in 1830; No.11 was the home of Dr
Henry Charles Boisragan, Physician Extraordinary to the King,
among whose other fashionable patients was, in 1812, Lord
Byron. The Crescent originally looked out onto Crescent
Gardens, interrupted in 1826 by the erection of the Promenade.
Little thought the interiors 'the best .. in the town'.
'The earliest important terrace in Cheltenham', (Verey).
(Chatwin A: Cheltenham's Ornamental Ironwork: Cheltenham:
1975-1984: 19,23,61; Sampson A and Blake S: A Cheltenham
Companion: Cheltenham: 1993-: 94-5,111; The Buildings of
England: Verey D: Gloucestershire: The Vale and The Forest of
Dean: London: 1970-: 149; Little B: Cheltenham: London: 1952-:
52; Radford S: The Terraced Houses of Cheltenham 1800-1850:
1992-: 17-25).