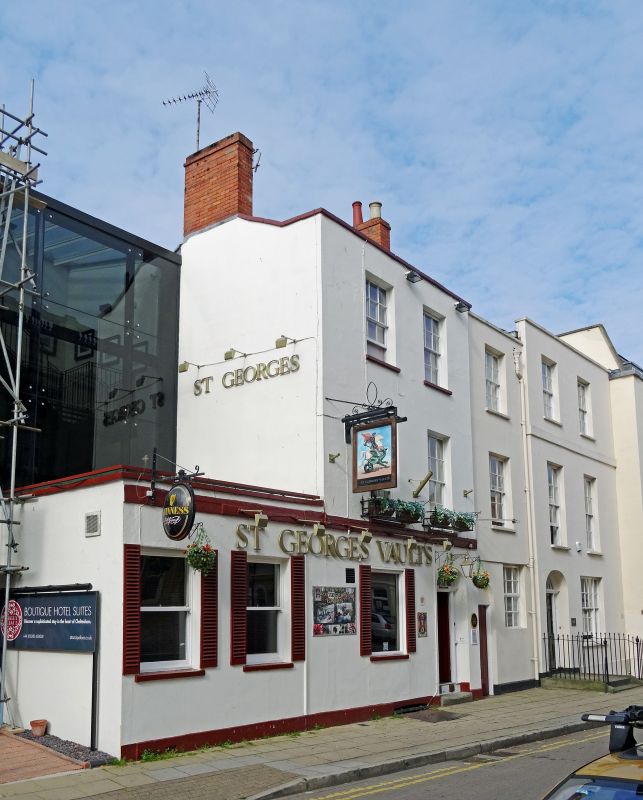 2 terraced houses and attached railings to right, now public
house and office. Numbered right to left, described left to
right. c1805-09, with later additions and alterations
including that c1876-1935 to left. Numbered right to left,
described left to right. Stucco over brick with slate roof at
right and replacement roof at left; tall left end and ridge
brick stacks; iron railings.
PLAN: triple-pile roof at left (hipped to rear), then through
passage; to right a single-depth entrance hall in centre and
double-pile roof at right.
EXTERIOR: 2 storeys with basement to right, 5 first-floor
windows (2:3), that to centre set back slightly, with
single-storey, 2-window extension to left. Stucco detailing
includes first-floor band to left and second-floor band to
right. 6/6 sashes where original, with 6/6 between 2/2 sash to
ground floor at right, all in plain reveals and with sills.
Entrance below 2nd and 4th windows: 6- and 5-panel doors (the
upper panels fielded) with sidelights and fanlights with
batwing and circle glazing bars. Further off-centre opening
with plank door and blind fanlight to passage. Crowning
blocking course and copings. Rear has 6/6 sashes, small
round-arched staircase window with stained glass and
margin-lights to No.51.
INTERIOR: house to right has central hallway inner glazed door
and fanlight; curved open-well staircase with stick balusters
and wreathed mahogany handrail; round-arched niche part way up
stairs; hall has ceiling frieze with Greek key motif.
Otherwise not inspected.
SUBSIDIARY FEATURES: lancet area railings have urn finial to
stanchions.
HISTORICAL NOTE: building along the west side of St George's
Place commenced in 1805, the houses are shown as built on the
1809 Map.