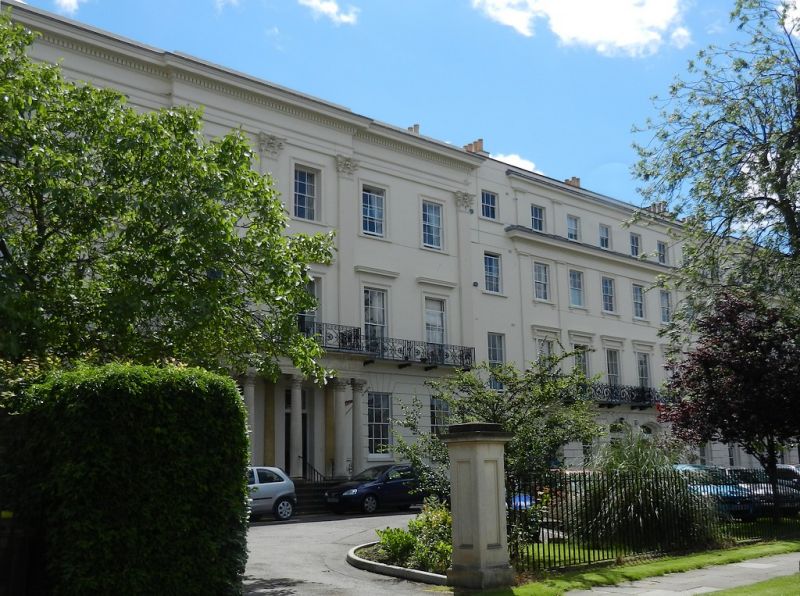 2 terraced houses, now residential home with attached area
balustrade. c1840s with c1970s conversion. Probably by Edward
Jenkins for developer James Fisher. Stucco over brick with
ashlar porch and concealed roof; iron balconies and area
balustrade.
EXTERIOR: 3 storeys on basement, 6 first-floor windows.
Central 2-window breakforward has fluted Corinthian pilasters
to ends and centre through first and second floors, also outer
end fluted Corinthian pilasters; first-floor band; crowning
dentil entablature. Ground floor has horizontal rustication,
drawn into voussoirs over windows. 6/6 sashes where original
with plain reveals and sills, those to first and second floors
in tooled architraves, those to first floor have frieze and
cornice. Paired central entrances, that to left now blocked
and with sash window, otherwise 4-panel, part-glazed door with
overlight with margin-lights. Flight of 6 roll-edged steps to
5-columnar Corinthian portico with dentil entablature.
INTERIOR: retains many original features including 2 adjoining
dogleg staircases with alternate stick and embellished rod
balusters and wreathed handrails; panelled shutters to some
windows; embellished cornices with grape ceiling friezes.
SUBSIDIARY FEATURES: first-floor has continuous Carron Company
double-heart-and-anthemion balcony. Area balustrade has double
stylized heart motif.
HISTORICAL NOTE: Suffolk Square occupies land bought by the
Earl of Suffolk from the de la Bere's, on which he built
Suffolk House for his own residence; his daughter later sold
much of the land, on which Suffolk Square now stands. The
Square is shown as planned but not complete on the Post Office
Map of 1820, however Faithful House is not yet marked on
Merrett's Map of 1834. Part of a distinguished group of
buildings in Suffolk Square. Residential home includes
Faithfull House (central and southern part) (qv).
(Chatwin A: Cheltenham's Ornamental Ironwork: Cheltenham:
1975-1984: 46; Merrett HS: Plan of the Town of Cheltenham:
1834-; Blake S: Notes).