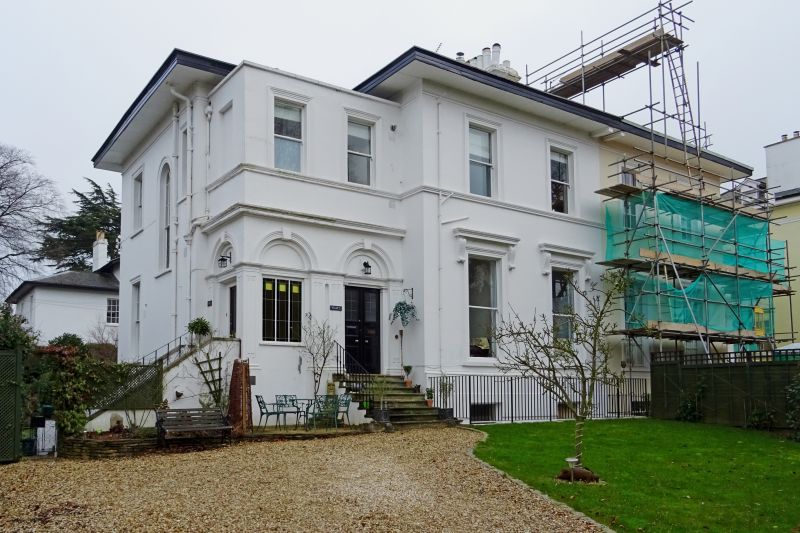 Pair of semi-detached villas. c1830-50 with later additions
and alterations. Stucco over brick with hipped slate roof and
stucco ridge stacks.
EXTERIOR: 2 storeys on basement, 2:4:2:1 windows. 4-window
range between recessed 2-window ranges, that to right has
projecting ground-floor porch at angle, porch to left has been
extended and raised to full height; further single-bay range
set back to right. Stucco detailing includes moulded
first-floor sill band; tooled architraves to windows, those to
ground floor have cornices on console brackets. 6/6 sashes
where original, those to far left are tripartite with 2/2
between 2/2 sashes to ground and first floor, that to ground
floor has cornice on console brackets. Basement has 4/8 sashes
where original. Entrances: flights of 8 roll-edged steps to
6-fielded-panel doors with fanlights (blocked to left) in
tooled architrave with keystone and imposts, pilasters have
incised Greek key motif. House to left has further
round-arched opening with blind window and further inserted
entrance to left return. Wide eaves. Returns have round-arched
staircase sashes.
INTERIOR: not inspected.
HISTORICAL NOTE: The Park had been laid out by 1833 by its
owner Thomas Billings as an oval tree-lined drive with a
central park which for a short period in the mid-C19 became a
zoological garden. In 1839 the development was bought by
Samuel Daukes who continued the building. One of the principal
developments influenced by White's and Nash's schemes for
Regent's Park (1809-11).
(Sampson A and Blake S: A Cheltenham Companion: Cheltenham:
1993-: 36,92; Merrett HS: Plan of the Town of Cheltenham:
1834-; Girouard M: The English Town: 1990-: 270-271).