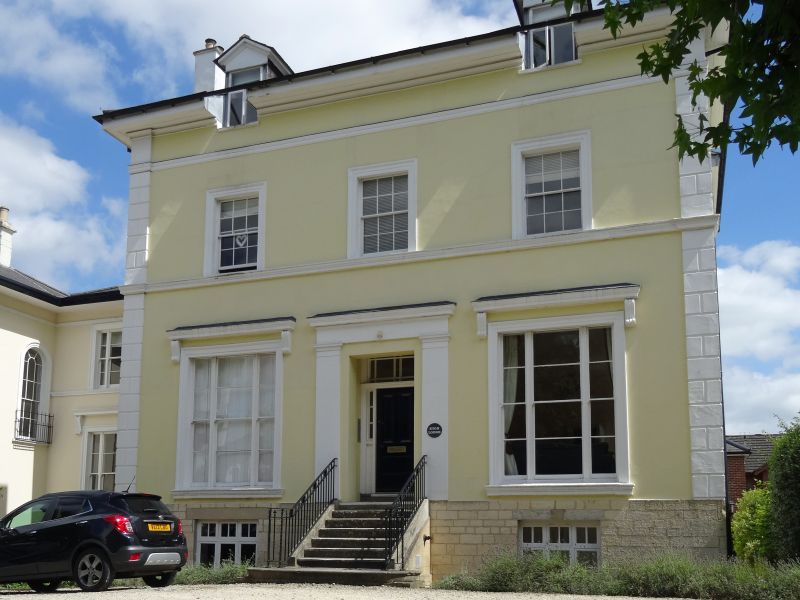 Villa, now college building of Cheltenham and Gloucester
College of Higher Education. c1833-50. Stucco over brick with
hipped slate roof and Cotswold stone basement. Double depth
with central hallway.
EXTERIOR: 2 storeys on basement and with attic, 3 first-floor
windows. Stucco detailing includes end rusticated pilasters,
moulded architraves to windows, those to ground floor with
cornices on modillions, moulded first-floor sill band, moulded
band over first floor, crowning cornice. Wide eaves. First
floor has 6/6 sashes. Ground floor has tripartite windows with
2/2 horizontal-pane between 2/2 sashes. Gabled attic dormers
interrupt eaves. Attic and basement have replacement casement
windows. Entrance: flight of steps with balustrade to central
3-panel door (upper panels fielded, lower flush) with
sidelights and overlight with margin-lights, within doorcase
of Doric pilasters, frieze and cornice with flattened
'pediment'. Rear retains tall staircase sash with
margin-lights.
INTERIOR: retains plasterwork including frieze to hall with
egg-and-dart cornice, and room to left has cornice and vine
ceiling frieze; joinery includes 6-panel doors, open-well
staircase with rod and bobbin balusters and run-out handrail
with lion's paw foot; otherwise not inspected.
HISTORICAL NOTE: The Park had been laid out by 1833, by its
owner Thomas Billings, as an oval tree-lined drive with a
central park which, for a short period in the mid-C19, became
a zoological garden. In 1839 the development was bought by
architect Samuel Daukes who continued the building. This was
one of the principal developments influenced by White's and
Nash's schemes for Regent's Park, London (1809-11). Eton Lodge
(originally known as Eton Villa) became Eton Lodge Hotel in
1942 and was taken over by St Mary's College in 1956.