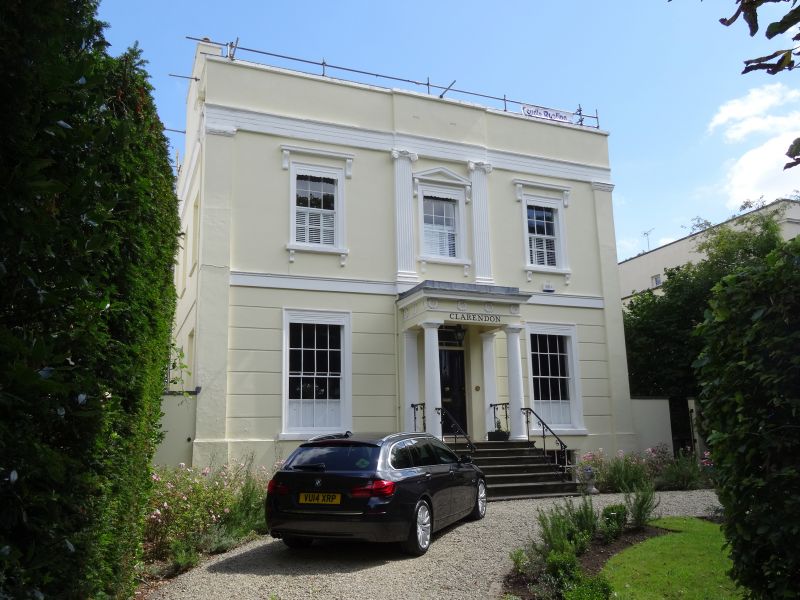 Villa and attached railings. c1834-8 with later additions and
alterations including c1970s single-storey range at rear.
Stucco over brick with concealed roof, left end stucco stack
and iron railings.
EXTERIOR: 2 storeys on basement and attics to rear, 3
first-floor windows, with 2-low-storey service range to rear.
Stucco detailing includes plinth surmounted by end Doric
pilasters and fluted Ionic pilasters at first floor to central
breakforward; horizontal rustication to ground floor, tooled
first-floor band; windows have tooled architraves, those to
first floor have sills on feet and cornices on console
brackets, with pediment on consoles to centre window. Flight
of 6 roll-edged steps to central entrance a 4-fielded-panel
door with overlight with margin glazing bars within distyle
Doric porch with engaged pilasters, architrave has frieze with
wreaths, cornice and blocking course. Ground floor windows are
tall 8/8 sashes. First floor has 6/6 sashes. Blind boxes
remain. Basement has 4/8 sashes. Rear retains 6/6 and 8/8
sashes. Attic dormers have late C20 casement windows.
INTERIOR: not inspected.
SUBSIDIARY FEATURES: railings to sides of steps have scrolled
rods.
HISTORICAL NOTE: The Park had been laid out by 1833 by its
owner Thomas Billings as an oval tree-lined drive with a
central park which for a short period in the mid-C19 became a
zoological garden. In 1839 the development was bought by
Samuel Daukes who continued the building. This is one of the
principal developments influenced by White's and Nash's
schemes for Regent's Park in London (1809-11).
(Sampson A and Blake S: A Cheltenham Companion: Cheltenham:
1993-: 36,92; Girouard M: The English Town: 1990-: 270-271).