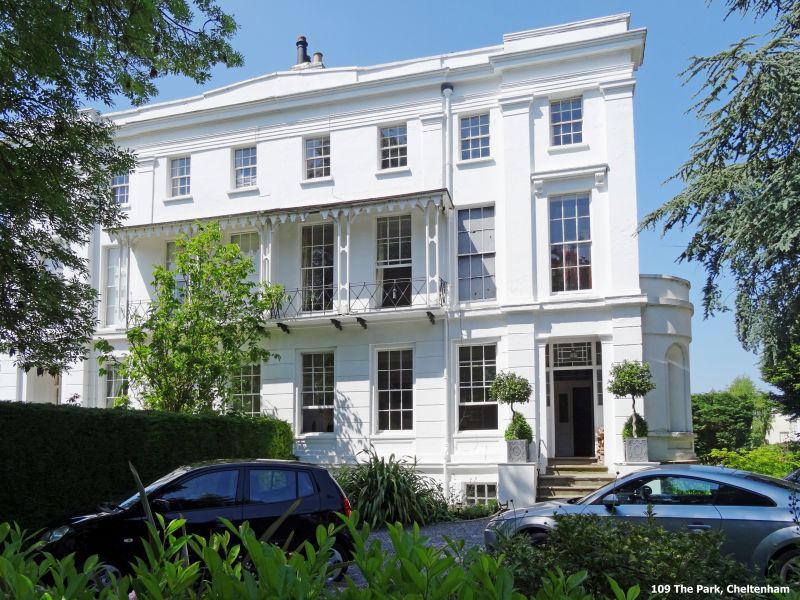 Pair of semi-detached villas and attached area railings.
c1833-50. Stucco over brick with hipped slate roof, stucco
ridge stacks and iron area railings and verandah.
EXTERIOR: 3 storeys on basement, 6 first-floor windows; with
2-low-storey, 2 first-floor window range set back to left.
Ends break forwards slightly. Stucco detailing includes
horizontal rustication to ground floor; first-floor band
surmounted by Doric pilasters between windows, crowning
architrave, frieze and cornice with blocking course and
copings; first floor end windows have cornices on console
brackets. Mainly 6/6 sashes throughout; range at left has
tripartite window, 6/6 between 2/2 sashes. All windows in
plain architraves and with sills. End entrances, flights of
roll-edged steps to recesses with Doric pilasters, within are
4-panel doors with sidelights and overlights. Basement has 6/6
sashes. Returns to ground floor have bowed breakforwards,
partly interrupted at left by extension. Rear has 2-storey bow
window to No.107 with 6/6 ashes, curved on plan.
INTERIOR: not inspected.
SUBSIDIARY FEATURES: verandah across central 4 windows has
latticework balustrade and pierced timber uprights with
scalloped frieze. Area railings have X-motif.
HISTORICAL NOTE: The Park had been laid out by 1833 by its
owner Thomas Billings as an oval tree-lined drive with a
central park which for a short period in the mid-C19 became a
zoological garden. In 1839 the development was bought by
Samuel Daukes who continued the building. One of the principal
developments influenced by White's and Nash's schemes for
Regent's Park, (1809-11) London. One of the principal
developments influenced by White's and Nash's schemes for
Regent's Park, (1809-11) London.
(Sampson A and Blake S: A Cheltenham Companion: Cheltenham:
1993-: 36,92).