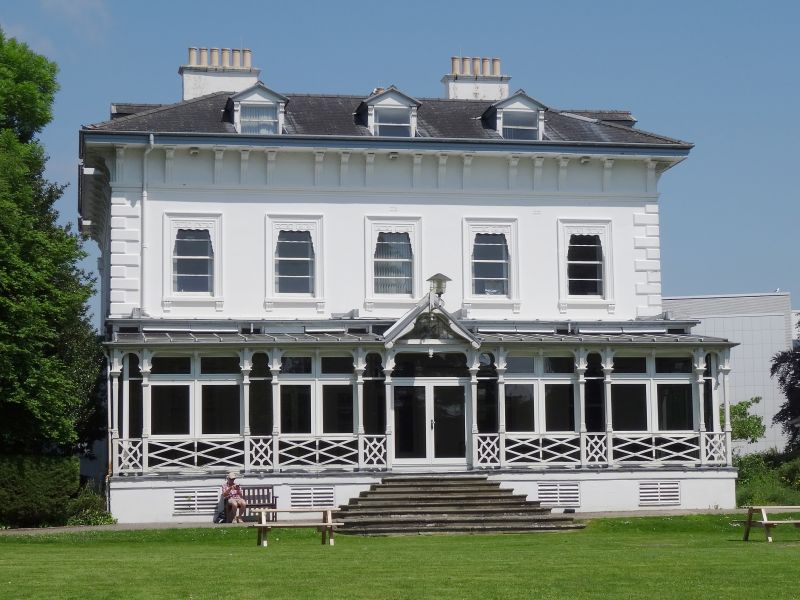 Villa, now part of Cheltenham College of Higher Education, and
attached area railings. 1847 with later additions and
alterations including verandah to garden facade c1890s for Mrs
MacKnight Crawford of Lauriston Castle; mid-C20 range to east.
Stucco over brick with flattened hipped slate roof and 3
stuccoed stacks with cornices, timber verandah and iron area
railings. Double-depth plan with central hallway.
EXTERIOR: 2 storeys on basement and with attics, 5 first-floor
windows. Stucco detailing includes quoins to angles, moulded
first-floor band, crowning moulded cornice surmounted by
moulded brackets and wide eaves; tooled architraves to
windows, those to ground floor have cornices on console
brackets, those to first floor have sills on feet. 2/2
horizontal-pane, and 1/1 horned sashes, all in plain reveal
and with sills, the central first-floor window is divided and
between 2 smaller windows. All windows in plain reveals and
with sills. 3 attic dormers, the outer ones break eaves line,
2/2 horizontal-pane sashes and pedimented gables on corbel
brackets. Concealed basement. Central entrance, flight of
roll-edged steps to solid projecting porch with Doric
pilasters and dentil entablature with blocking course; early
C20 studded double doors with fanlight with glazing bars in
surround with moulded head and Doric pilasters. Garden facade:
2 storeys with attics, 5 first-floor windows. Stucco detailing
includes quoins to angles, crowning moulded cornice surmounted
by brackets supporting wide eaves. Windows have tooled
architraves. 2/2 horizontal-pane sashes where original, those
to first floor have blind boxes; all in plain reveals, those
to first floor have sills. 3 attic roof dormers with 1/1
sashes and pedimented gables on brackets. Ground-floor
verandah has flight of steps to central entrance, double
part-glazed doors with overlight and gable with decorative
barge boards. Otherwise latticed lower stage and plate-glass
with shaped mullions and continuous overlight.
INTERIOR: noted as retaining original plasterwork and joinery.
SUBSIDIARY FEATURES: area railings to front facade have
X-motif.
HISTORICAL NOTE: The Park had been laid out by 1833 by its
owner, Thomas Billings, as an oval tree-lined drive with a

central park which, for a short period in the mid-C19, became
a zoological garden. In 1839 the development was bought by
architect Samuel Daukes who continued the building. One of the
principal developments influenced by White's and Nash's
schemes for Regent's Park (1809-11), London.
Fullwood was the main house in The Park. By 1823 it was an
Ursuline Ladies College; in 1931 the estate passed to St
Mary's College. The Boathouse (qv) was built as part of its
grounds.
Forms a good group with Entrance to Fullwood (qv) and
Boathouse (qv), The Park. The modern block to the north-east
is not of special architectural or historic interest.
(Sampson A: Historic Buildings of Cheltenham and Gloucester
College of HE: Cheltenham: 1991-).