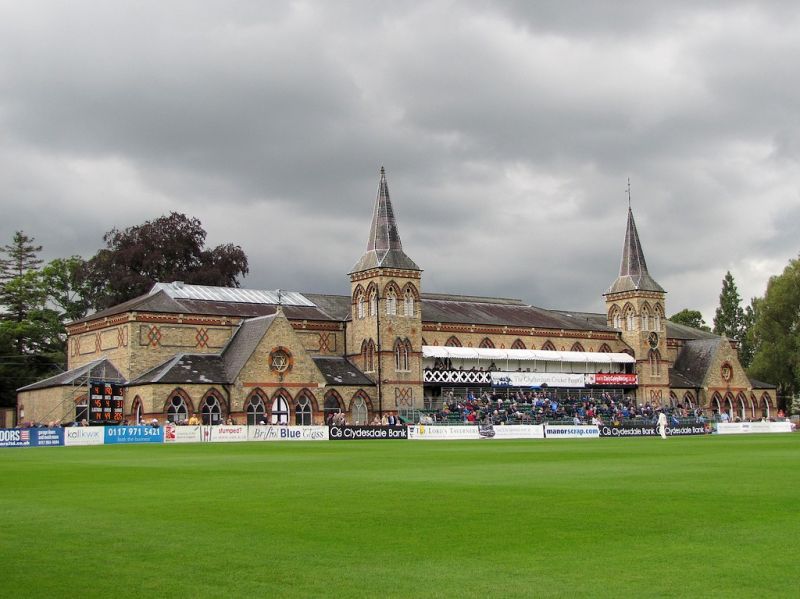 Gymnasium, pavilion and fives courts with attached railings
and gates. 1864 by FH Lockwood with later additions and
alterations including c1960s upper stages to pavilion. Gault
brick with red and black brick patterning and hipped roofs,
that to gymnasium is hipped; iron railings and gates. Severely
symmetrical Gothic in polychrome materials.
EXTERIOR: Fives Courts: single tall storey, 4 bays with
lean-to at right. Each bay has pilaster between and double
plank doors with divided lights over. Sloped roof. Severely
plain at rear with upper frieze of polychrome brick.
Pavilion: Outer single-storey, 2-window ranges, now 2-storey,
with single tall storey and sloped roof between. Outer bays
have two 2-light windows with trefoils to heads and continuous
hoodmoulds; range at right has 3 similar windows. To rear a
brick band with 8 small windows above.
Gymnasium: 2-storey, 7-bay centre flanked by projecting
2-stage towers with broach spires; further extensions with
outer lean-tos interrupted by projecting gabled breaks. Centre
section has 2 levels of pointed-arched windows with plate
tracery and polychromatic voussoirs linked by polychromatic
impost band. Balcony and rostrum with quatrefoil motif.
Similar windows to ground floor of extension and gabled
ranges, with oculus to gable, otherwise decorative brickwork
to upper stage. Centre and ends have polychromatic eaves
treatment, with frieze, dentil cornice and cogged eaves.
Towers have band and patterned brick work to lower stage, then
pair of lancets with polychrome voussoirs impost band; clock
and pairs of 2-light belfry openings to each side, polychrome
voussoirs and impost band, decoratively treated eaves.
Entrances: off-centre and to base of tower: arched openings
with plank doors and pointed overlights, some blind.
Front to Thirlestaine Road blank apart from 7 arched windows
at first-floor level.

INTERIOR: not inspected.
SUBSIDIARY FEATURES: railings and gates between have alternate
fleurs-de-lys and spearhead bars.
Verey describes this as 'very nice'.
Abuts Railings to Cheltenham College Playing Fields, Sandford
Road, and College Lawn (qv).
HISTORICAL NOTE: the planning of gymnasia had been refined by
the army's Physical Training Corps in the 1850s and
subsequently sport became an integral part of the Victorian
public school movement. This is a very impressive example of
its type.
(The Buildings of England: Verey D: Gloucestershire: The Vale
and The Forest of Dean: London: 1970-: 135).