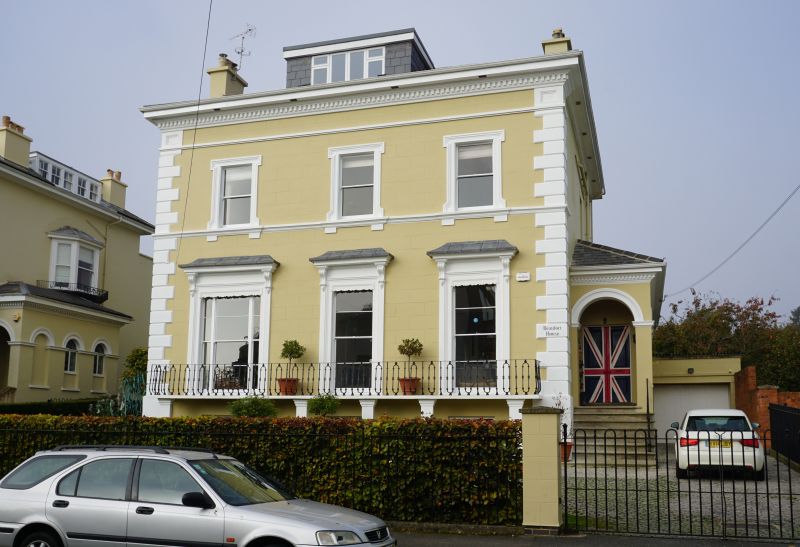 Villa and attached railings. c1851-2, with later additions and
alterations including c1970s attic dormer. Stucco over brick
with hipped slate roof, end stucco stacks with cornices and
iron balcony and railings.
EXTERIOR: 2 storeys on basement and with attic, 3 first-floor
windows, with single-storey porch to right. Stucco detailing
includes quoins to angles, tooled architraves to windows,
eared to first floor and with frieze and hooded cornice on
console brackets to ground floor; tooled first-floor sill
band, moulded band over first-floor windows, crowning dentil
cornice. Tall 2/2 horizontal-pane sashes to ground floor, that
to left a tripartite window, 1/1 sashes to first floor;
basement has 4/4 sashes. All windows in plain reveals.
Entrance at right, flight of roll-edged steps to solid porch
with round-arched opening with tooled arch on imposts, within
are double 4-panel doors. Rear retains 6/6 sashes and 9/9
staircase sash, also a tripartite window with 1/1 sashes.
INTERIOR: not inspected.
SUBSIDIARY FEATURES: railings to sides of steps have
embellished rods balusters. Ground-floor balustrade on short
plinths have embellished oval and rod motif. Ground-floor
windows have blind boxes.
HISTORICAL NOTE: part of the Pittville development, completed
after Joseph Pitt's death in 1842. Originally planned as
Beaufort Place and laid out as West Spa Approach, c1844, it
was not part of the John Forbes's original plan for the
estate. With the other villas, originally known as Nos 1-4
Beaufort Villas.
Forms a group of similarly-designed villas along West Approach
Drive with Mount Sorrell (qv), Cleeve House and Homewood (qv)
and Park Gate (qv).
(Blake S: Pittville: 1824-1860: Cheltenham: 1988-: 75-76).