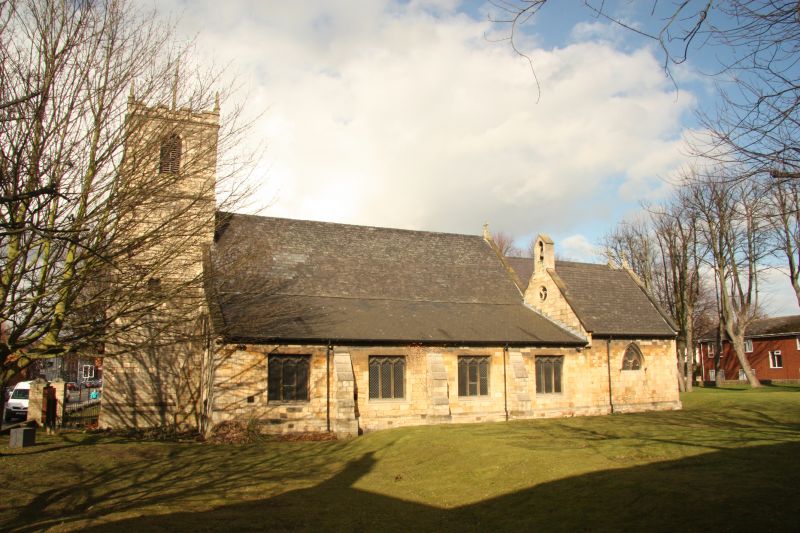 Church. C18 and C19. West tower 1721 by Henry Grix. Nave and
north aisle 1861, by Henry Goddard. Chancel rebuilt 1878, and
south aisle and south chapel added 1884 by William Watkins.
Dressed stone and ashlar with slate roofs. Coped gables and
chamfered plinths throughout. Pointed arched windows with
hoodmoulds.
PLAN: west tower, nave with aisles, chancel, vestry, south
chapel.
EXTERIOR: west tower, 3 stages, unbuttressed, has string
courses and crenellated parapet with 4 pinnacles. Pyramidal
roof with finial. To west, a round headed doorway with
keystone, and above it, a blocked window. Above again, a round
window with a keystone, and a clock. North and south sides
have a small quatrefoil. Bell stage has a round headed louvred
opening on each side.
Nave west end has single lancets flanking the tower, and
beyond, single buttresses.
Aisles, 4 bays, have buttresses. West ends have Decorated
style 2-light pointed arched windows. North and south sides
have four flat headed 4-light Perpendicular style windows.
Chancel east end has a Decorated style 3-light pointed arched
window, and the south side has an Early English 2-light
pointed arched window.
Vestry, 2 bays, has buttresses and a flat headed door and
mullioned casement. To east, an octagonal stack and a 2-light
pointed arched window.
South chapel has to east a 2-light pointed arched window with
Geometrical tracery, and to south a similar window, truncated.
West gable has a single round window and above it, a gabled
single bellcote. Porch below tower has a double chamfered
round headed doorway.
INTERIOR: nave has 4-bay arcades with rendered rectangular
piers without capitals, and moulded arches. Arch braced
principal rafter roof. North-west window has late C19 stained
glass.
Aisles have four-centred arches at the east end, that to north
with screen and organ pipes. South aisle west window has
stained glass, 1891. Both have lean-to roofs.
Chancel has moulded double chamfered arch with hoodmould,
round responds and wooden rood. Billeted sill band and scissor

braced roof. North side has organ opening and doorway.
Panelled east end has traceried reredos and stained glass
window. South side has C19 piscina with shafts, seat recess
with dogtooth hoodmould, and four-centred arch to chapel with
traceried stone screen. C19 stained glass window.
South chapel has C19 stained glass window. South side has a
reset conical corbel and shaft, and a credence with round
shafts. Iron screen to western arch. Principal rafter roof.
FITTINGS: include octagonal stone pulpit, 1903, by William
Watkins, similar font, brass lectern and plain benches, all
C19. Chancel and south chapel windows by Canon HF Sutton.
MEMORIALS: include small tablets and brass, C19 and C20.
This church was rebuilt in 1721 on the site of a medieval
church destroyed in the 1640s.
(Buildings of England : Lincolnshire: Pevsner N: Lincolnshire:
London: 1989-: 496-497).