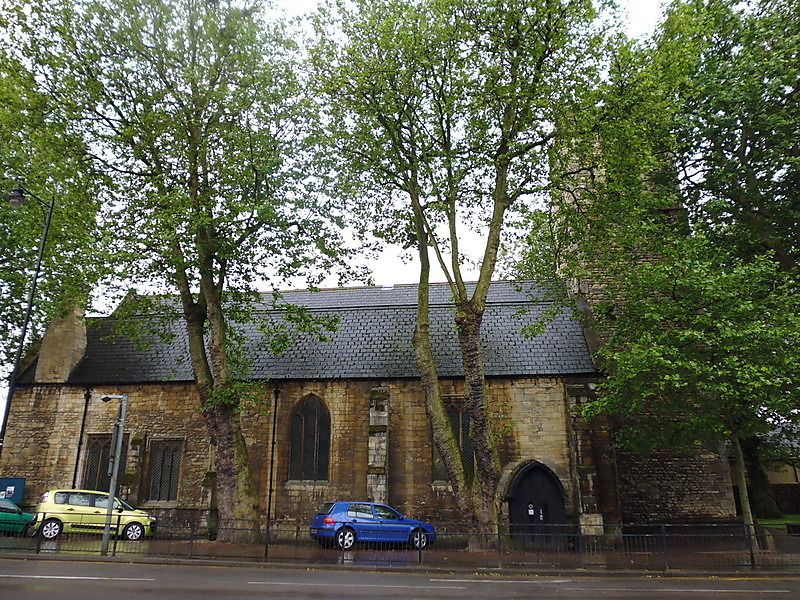 Church. C11, C12, C13. South aisle 1877 by Leach of Cambridge.
Restored 1872 by R C Clarke of Nottingham. Tower restored by
Watkins & Son, 1908. Additions and alterations 1975.
Dressed stone and coursed rubble, with ashlar dressings and
slate roofs. Nave and aisles have coped gables.
PLAN: west tower, nave and chancel under continuous roof,
aisles, north chapel, vestry.
EXTERIOR: west tower, C11, 2 stages, has quoins, string course
and eaves band, and crenellated parapet. To west, restored
doorway, now a window, with imposts and checkered hoodmould.
To its right, a reset stone with Roman and Anglo-Saxon
inscriptions. Above it, 2 round headed windows and above them,
a clock. Recessed bell stage has round headed twin openings
with mid wall shafts and various C11 capitals.
Nave has at the west end small buttresses flanking the tower.
East end has 3 buttresses, moulded plinth and sill band, and 2
single lancets with hoodmoulds and stops. Above them, a
pointed quatrefoil with moulded surround.
North aisle and chapel, C13, 4 bays, has dentilled eaves and
sill band to north-east, and a C19 side wall stack. 4
buttresses, those to the west being larger. South side has, to
east, 2 flat headed Perpendicular 3-light windows. To their
right, 2 similar windows, C19 and C14. Renewed doorway with
C20 leaded hood. East and west ends have Decorated 3-light
windows with hoodmoulds. East end has a diagonal buttress.
South aisle, 4 bays, has buttresses and stepped sill band.
Reset C13 moulded south door with double shafts. To its right,
2 altered 3-light windows with intersecting tracery. At the
east end, a similar window. To south, C20 vestry with a reset
C13 roll moulded arch with shafts and scallop capitals, and 2
interlace panels. These are said to be from the churches of St
Benedict and St Mark.
INTERIOR has C19 panelled barrel vaulted roofs throughout.
Chamfered tower arch has a C20 glazed screen. Above it, a
round headed doorway.
North arcade, C13, 3 bays, has concave sided octagonal piers
with 4 ringed shafts and stiff-leaf capitals. Double chamfered
arches with hoodmoulds and stops.
South arcade, C19, has plain octagonal piers and capitals.
Chancel has double chamfered arch with hoodmould and keeled