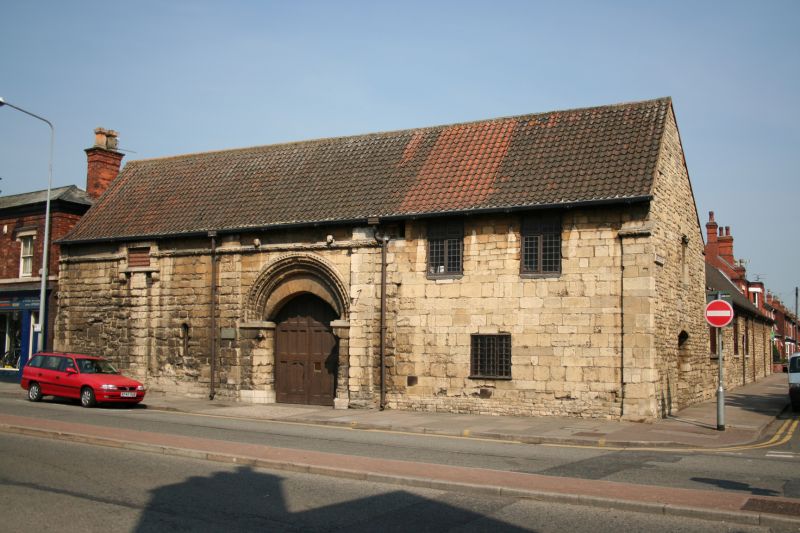 Formerly known as: John o'Gaunt's Stables HIGH STREET.
Major domestic building, possibly the town house of Henry II,
c1157, incorporating in its foundations part of the C3 Foss
Way. Used as a guildhall 1251-1547, remodelled early C17 as a
school and used in part as maltings, C15 to 1981. South range
1895. Excavated 1981-1986 and restored 1984-86. Now the
offices of the Lincoln Civic Trust and a church hall.
Dressed stone with ashlar dressings and pantile roofs. Single
storey and 2 storeys. C-plan.
EXTERIOR: west range, 5 bays, has shallow buttresses,
chamfered plinth and band with bird and beast masks to the
northern part. Near-central moulded carriageway arch with
segmental pointed inner arch, flanked by single buttresses.
Above it, 2 reset masks. To left, a single light, and to
right, a C20 casement. Above, to left, a bracketed square
louvred opening and to right, two C20 casements.
South gable has C20 fenestration, and above, 2 reset corbels.
North range south side has to left a single storey range, 3
bays, with a doorway flanked to right by 2 unglazed windows
with wooden mullions.
To the right, a 2 storey building, 2 bays, known as the Norman
House, with a shallow central buttress and a moulded first
floor band. To left, a wide mid C20 door and an unglazed
window, formerly mullioned. To the right, a shouldered doorway
and a small window. Above, 2 double round headed windows, that
to the right without its central shaft. To the left, a small
pointed light.
South range, 5 bays, fronting Sibthorp Street, incorporates
several reset C12 fragments.
INTERIOR has in the north-west corner of the west range a
fireplace with joggled lintel, flanked by a blocked window and
a doorway. North-east corner has a restored doorway and a C12
stone spiral stair overlaid by a late C20 stair. North wall
has a window opening. First floor hall has on the west side a
fireplace, flanked to the left by 2 windows and to right by a
single window, all with keeled shafts. North gable has a
blocked double arched opening with central round pier.
Restored C17 single purlin roof. North range interior has
several reset C12 fragments, and east end has a C17 scissor
braced double purlin roof.

HISTORY: St Mary's Guildhall may well be " the only survivor
from the small group of the king's town houses which existed
in several major towns....St Mary's Guildhall is a domestic
complex on a palatial scale, indicating the highest social
status, and as such is representative of a little known urban
building type. " ( Stocker) It was used from 1251 to 1547 as
the headquarters of the Great Guild of St Mary, Lincoln's most
important guild, and began to be used as a maltings during
this time. It was remodelled early in the C17 for the Bluecoat
School, and was subsequently adapted for industrial uses,
mainly malting.
Scheduled Ancient Monument, County No.46.
(Buildings of England : Lincolnshire: Pevsner N: Lincolnshire:
London: 1989-: 504-505; The Archaeology of Lincoln: Stocker D
et al: St Mary's Guildhall, Lincoln: Lincoln: 1991-: 91-92).