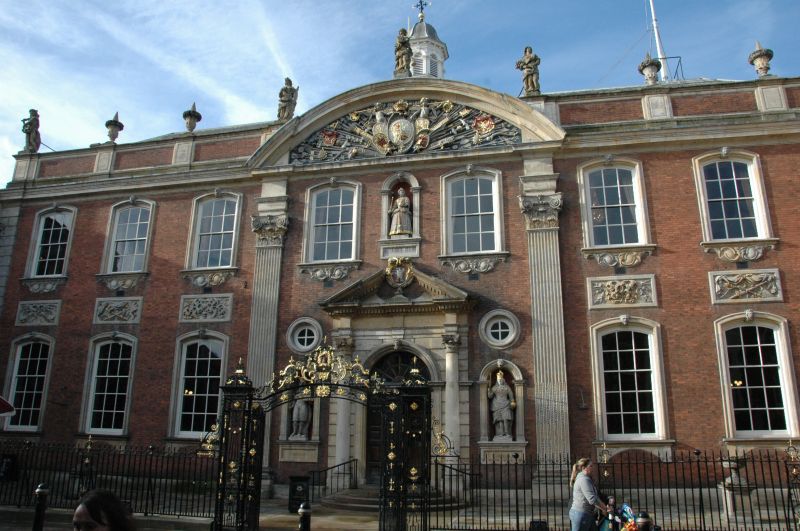 Guildhall. c1721-3 with later alterations including those to the
Assembly Room interior by George Byfield of 1791 and by Sir
George Gilbert Scott and Henry Rowe (municipal architect) in
1878-80. Architect: usually reputed to Thomas White, however more
probably by several craftsmen including White who signed the
pedimental sculpture; Robert Taylor, mason. Red brick with stone
dressings including plinth, pilasters, door surround, window
architraves, cornice, plinths to parapet, statues and niches,
coats of arms; slate roof, hipped to main range and tall brick
stacks with oversailing courses to wings.
PLAN: central block between short advancing wings; central
entrance to great hall beyond which a central staircase between
Crown and nisi prius courts; first floor has assembly room.
EXTERIOR: Main range of two storeys, eight first-floor windows,
arranged in 3 even bays 3:2:3, having an additional central niche
for a statue; wings of three-lower-storeys, 3 first-floor
windows. Plinth. Each range has full-height end pilasters with
horizontal rustication, those to wings clasp angles; full-height
fluted Composite columns to central bay surmounted by segmental
pediment containing richly-carved trophy with flute-playing
cherubs and royal arms. Crowning carved cornice and coped parapet
of brick panels between stone plinths, those to main range
surmounted by figures of Justice (to centre), Peace, Plenty,
Chastisement and Hercules (representing Labour) and 4 urns.
Central entrance, flight of 3 semi-circular steps to
20-raised-and-fielded-panel double doors surmounted by fanlight
with radial glazing bars in tooled round-arched architrave with
imposts and keystone with head of devil pinned by its ears,
within horizontally-rusticated surround with half-engaged
Composite columns, inscribed frieze and dentil broken pediment
with city arms on cartouche. To either side of entrance on ground
floor a round-arched niche with statues of Charles I and Charles
II; above entrance a similar niche with statue f Queen Anne;
niches have tooled architraves and aprons, over each ground-floor
niches a small, glazed oculus. Windows are all cambered-arched
sashes, except those to second floor of wings which are
straight-headed, all in tooled architraves with roll-moulding;
mainly 6/6 except those to ground floor of main
range are 6/9; architraves to main range have cherub-head
keystones and aprons which, to first floor have scrolled motif;
between ground and first-floor windows to main range are
rectangular panels carved with trophies and acanthus scrolls.
Further entrances to wings on returns at angle with main range:
6-panel doors and rectangular overlights with decorative radial
glazing bars in pilastered surrounds and with cornices. Roof
surmounted by central octagonal cupola with round-arched,
louvered openings and domed roof with weather-vane.
INTERIOR: large archways leading from great hall to court have
keystones with blind faces of Justice; the inscription 'Fiat
Justia, Ruat Caelum' in the Crown court, and 'Audiet Alteram
Partem' in the nisi prius court. First floor: Assembly Room has
shallow apses at both ends (introduced by Byfield), the ceiling
has emblazoned coving, panelling to walls. Decoration dates from
late C19.
HISTORIC NOTE: the iconography of the royal statues on this
building is interesting for the absence of James II, and William
and Mary. Girouard, 'built for joint use by the county and the
city, and ... paid for by subscription raised in both Worcester
and Worcestershire. Worcester, being a county as well as a city,
had its own assizes, which took place on the same visit of the
judges as the Worcestershire ones. The joint use explains why the
Guildhall is noticeably larger and grander than town halls or
guildhalls built in other towns at the same time'. Girouard also
considers the Guildhall to be important as the prototype of a
significant development in the planning of such buildings,
providing the inspiration for the Shire Hall at Warwick, the
County Hall at Nottingham and the County Hall (Assize Courts) at
York. Until recently the architect was considered to have been
Thomas White, largely on the basis of his having signed the
pedimental sculpture and having submitted a design in 1718.
However, there is little evidence of White's practice as other
than a sculptor.
Pevsner: 'It is a splendid town hall, as splendid as any of C18
England.'
A delightful and important work, and an early example of a model
civic building.
Scheduled Ancient Monument.
(The Buildings of England: Pevsner N: Worcestershire:
Harmondsworth: 1968-1985: 323; Girouard M: The English Town: New
Haven and London: 1990-: 51-2; Country Life: 4.4.1952; NMR:
Photographs).