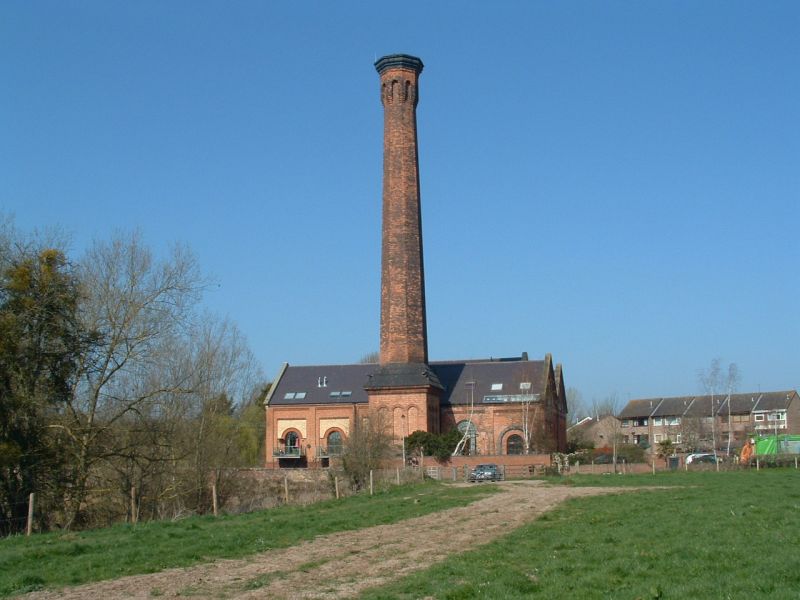 Former hydro-electricity works. 1894 with C20 extension. WH
Preece, FRS, consulting engineer, T Rowbotham of Birmingham,
builder, for Worcester Corporation. Converted into housing 1999.
Blue brick basement, red brick with buff brick panels in part and
corrugated asbestos roof with truncated ridge stack to right and
massive tall moulded chimney on left end. L-plan with range
extending to rear over river and further office wing on right
end. C20 extension projecting forward on left. Mainly tall single
storey and basement. Triple-span roof with wide gables facing,
the span to right with entrance. Double panelled doors up ramp
with blocked overlight and round brick arch with keystone. A tall
pilaster to either side and a tall round-arched multi-pane window
beyond within slightly recessed panel. Above is a large wide
plaque inscribed 'City of Worcester Electricity Works 1894' with
coat of arms. C20 extension projecting forward on left. To left
are 2 spans with blocked round windows in moulded and panelled
gables, the walls below each formerly of 3 windows, now mostly
blocked and with C20 extension to front. To right a 2 storey, 2
window range with sash windows and 5-panel door with overlight
and pediment to left and simpler door to right. Similar arched
windows to rear of main ranges. Below these are round arches in
the basement. In the range over the river were situated the 3
turbines. On the up-stream side are breakwaters now partly
filled-in between. The range to the side of the river was the
boiler house, the chimney for which is on the left end and is a
prominent landmark. Steam power assisted in the night-load as a
top-up.
INTERIOR: remodelled as housing, and not inspected.
HISTORICAL NOTE: Worcester was the largest C19 hydro-electric
public-supply works in Britain. having a water-generated capacity
of nearly 400KW. The city was the first municipality to build and
operate on a long-term basis its own hydro-electric power
station.
Graded as an outstanding and early example of the electricity
industry, remarkable for its strong external character and degree
of survival in a national context.
(Industrial Archaeology Review: Tucker DG:: Hydro-Electricity for
Public Supply in Britain, 1881-1894: 1977-: 126).