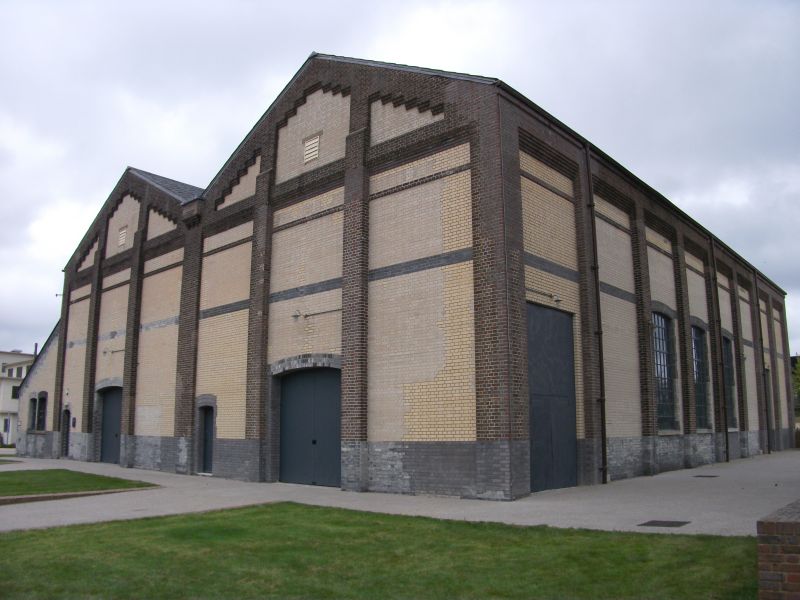 INTERIOR: steel truss roofs. N bay has 1916 electric motor surviving from the original No. 2 'seven-foot' tunnel: its tunnel was removed in 1944 and replaced by a 4x3ft low turbulence tunnel, which retains control and balance rooms and has a beautifully-finished timber tunnel where the air was led through gauze screens running on metal tracks via a contracting entrance into the working section. Balance mechanism of remarkable sensitivity (1/1000 lb) survives in working order from the original 'five-foot' tunnel installed in 1931.

HISTORY: The planning and construction of the R52 wind tunnel building at Farnborough marked a critical period in the First World War, when public censure over the vulnerability of the Royal Aircraft Factory's BE2c fighter had led to Farnborough's closure as a site for the manufacture of aircraft by the British state. Farnborough, now renamed the Royal Aircraft Establishment, now entered a new era for the site at the heart of cutting-edge developments in the aviation industry on the world stage. This wind tunnel was built to house two 'seven foot' wind tunnels, the 'five foot' tunnel added in 1931 being the prototype for the Q121 tunnel built in 1934-5. From 1918 to 1958, the aerodynamics team was led by the internationally-recognised Miss Fanny Bradfield, who became Head of the Small Tunnels Division in 1942. The Small Tunnels (as the tunnels in R52 were known) were used for aero-elasticity experiments, the testing of Mitchell's Supermarine 'S' series of high-speed aircraft, for streamlining bomb shapes and their release characteristics and for the first supersonic tests (with high-speed aerofoils) in 1928. Although only the 1916 motor has remained from the First World War interior, the plan and form of this building is directly related to the dimensions and layout of the tunnels that it had to accommodate. It is one of the world's earliest surviving wind tunnel buildings, standing in close proximity to the later examples, and thus makes a major contribution to the unique grouping of wind tunnel buildings on this internationally-important site. It was adapted in the inter-war period, one of these housing the model for what became the open-return tunnel of 1934-5 (Q121). It also retains a tunnel installed after 1944 that relates to a critically important phase in the history of the RAE within an international context. The construction of the 4 x 3 ft tunnel, which achieved the ultimate reduction in turbulence (said to be the lowest in the world) in order to facilitate high-precision testing, resulted from work in the 1930s on the measurement of drag in flight. Its work on the release characteristics of the atomic bomb underpinned the efficacy of the British 'V-force' nuclear deterrent, and it was also used for early experimental work on the Brabazon airliner, Malcolm Campbell's speed boat and the narrow delta-winged aircraft that culminated in Concorde.