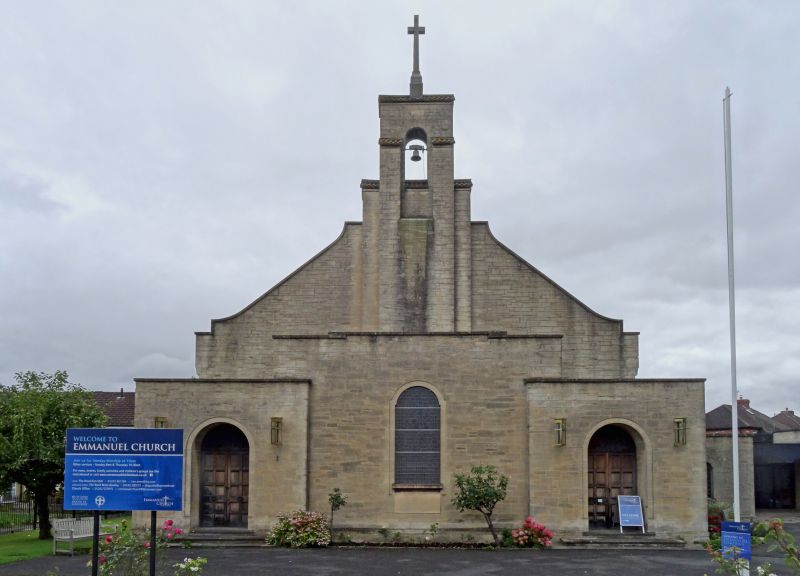 Façade: west gable end has ramped coping to stepped kneelers and to the central bellcote. This is surmounted by a cross, has two tiers of gableted walls; the upper tier pierced by a round-arched opening; buttresses extending downwards from impost level to articulate the central bay of the façade. The ground floor is moderne in its massing, with a central baptistery with window flanked by projecting porches, with panelled oak doors to front, and small side lights.
The nave has 5-bay walls articulated by unornamented pilasters flanking recessed bays; each of these having a continuous stepped cornice and an arched window, with lead glazing and a shouldered reveal. The chancel has a pitched roof, like the nave, but this is at a lower level. To the north of the chancel is the organ chamber, and to the south, St. Oswald's Chapel. The chancel itself is very plain, with an east end ramped gable on stepped kneelers, and a recessed cross towards the top of the elevation.
Interior: dominant feature is the barrel-vaulted nave, with a shallow west-end baptistery entered by an arcade of three un-moulded arches. Baptistery houses a stone Gothic Revival font which belonged to an earlier church. Nave roof has ornamental partitioning, as do the ceilings on either side of the barrel vault. Nave, chancel and other windows have unusual supports to the arched top - in the form of a splayed wedge which dies into the window's return. Nave has parquet flooring and a sea of rush-bottomed chairs, with seating for 490 people. All the doors are oak panelled.
Chancel is dominated by two very large semi-circular arches, which allow access to the organ chamber and St. Oswald's Chapel. Above arches is a clerestory with deep-set splayed lights (5). Chancel has oak choir and clergy panelled stalls with simply-carved angels on the returns. East end of chancel has a large blind arched recess, which houses a comparatively elaborate wooden-carved Gothic Revival reredos, originally belonging to the earlier church.
Subsidiary Features: the vestries, which include clergy vestry and separate vestries for boys, men, and ladies, are entirely cut off from the church and are arranged to connect with the west end of the nave by a corridor.
History: the district of Emmanuel dates back to before 1887, and was to be associated with St. Luke's Parish; elsewhere in Cheltenham. Emmanuel's predecessor was an iron church built in Naunton Terrace, Cheltenham, which had already been rebuilt by the time it burnt down in 1916. Designs for a new church were first prepared in 1919. These designs provided for a stone building in Gothic style. This scheme, however, was abandoned as too expensive and more economical plans were drawn up. Many of the fittings from the old church were re-used in the 1936-7 church, including the reredos, chancel hangings, altar rail, panelled organ front and font.
Emmanuel is a simply-rendered but highly competent example of inter-war church architecture, mixing moderne and various historical traditions.