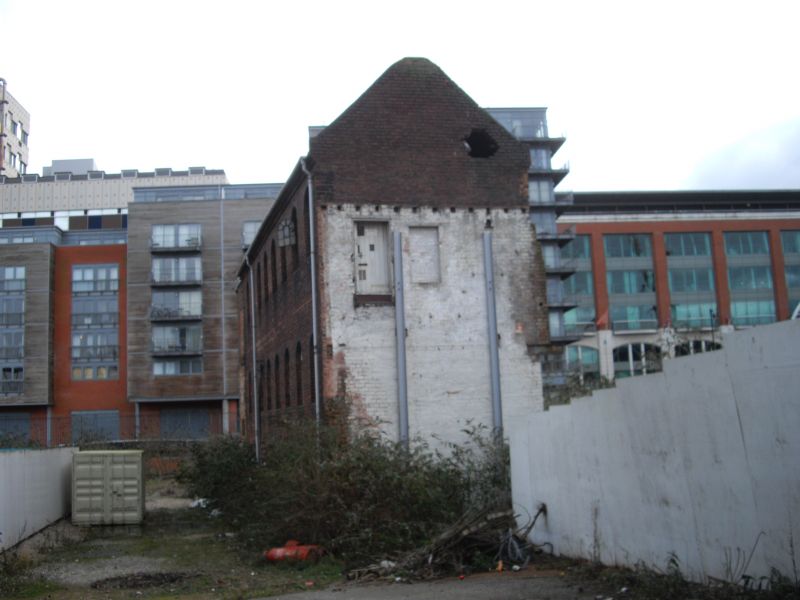 Former warehouse, now part of museum complex. Mid- C19 with C20 alterations. Red brick with blue brick detailing. Single ridge stack and slate and C20 sheet roof covering.
PLAN: L-shaped plan, the long side of the building running parallel with the line of the former canal arm to the north-east.
EXTERIOR: North-east elevation exposed , remaining parts of exterior enclosed within the museum complex of which the building now forms part. 3 storeys, 9 bays, the left hand bay forming the gabled end of a return range. Ground floor windows with shallow blue brick segmental-arched heads, now blocked. First and second floor openings with blue brick semi-circular arched heads, the upper floor openings with cast-iron multi-pane frames. Gabled bay with blocked openings to upper floors.
INTERIOR: Interior altered to form museum display and storage areas, but retaining window reveals of now-enclosed south-west side wall. The solid floors are carried on flat plastered beams set between the window arches. The ground floor retains a hearth in a bay separated from the main body of the building by a thick brick wall.
HISTORY: The building formed part of the extensive Elkington Mason and Company's works, which covered a large site bounded by the Birmingham and Fazelely Canal, Newhall Street and Charlotte Street. Between 1795 and 1810, an extension to the canal, known as Whitmore's Arm was built which extended westwards into the south-western part of the Jewellery Quarter. A now-demolished wing of the canal warehouse spanned the watercourse.
A mid-C19 warehouse which formed part of an extensive factory complex, specifically sited adjacent to a canal arm. Warehousing was an important aspect of manufacture and distribution in the Jewellery Quarter, and surviving examples associated with the canal system are now rare.