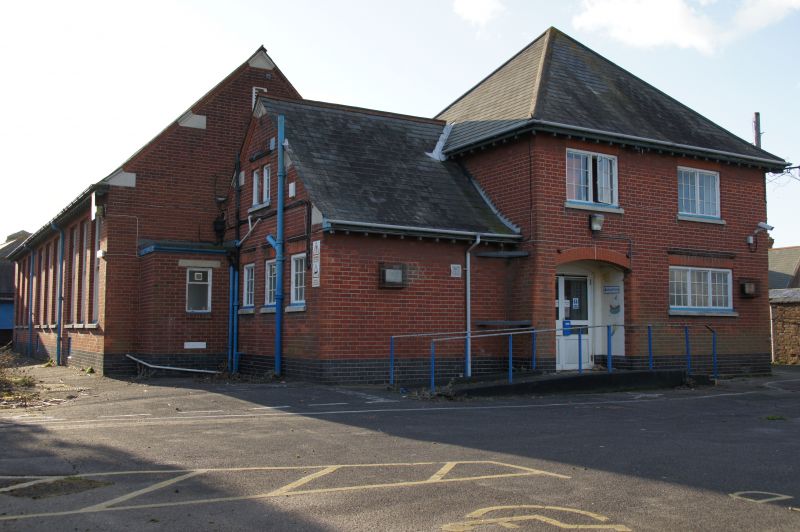 Also Known As: Boscombe British School, GLADSTONE ROAD
School built 1878-9 in Gothic style, constructed of red brick laid to English bond with buff brick and stone dressings and slate roof.
PLAN: Single storey, square on plan, consisting of two schoolrooms with central stack. The roof is cross-shaped with transepts over the main (south) schoolroom. The schoolroom to the north facing Gladstone Road is smaller, with small corridors to either side. The school has been extended to the south and this extension is not included in the listing.

EXTERIOR: The north elevation has a central gable with three large lancet windows with stone drip mould with foliate stops and stone sill. Above this, at the apex of the gable, is a triangular vent, again with dripmould; beneath the main window is a weathered date stone, now illegible. To either side of the gable are three-light windows with stone surrounds, under lower roofs, which light the corridors. The east elevation has a large gable to the left (south) with Gothic-arched tripartite window with chamfered brick mullions with moulded stone dripmould with foliate stops, and buff and red brick basket weave pattern infill. Above this is a trefoil coloured light in apex of gable. To the right of this the corridor has moulded stone eaves; the original entrance has been bricked in. To the right of this, under a small gable, a Gothic-arched window also has stone dripmould. Both this small gable and the larger one have verge coping on moulded kneelers and finials. The central brick stack has stepped cap with moulded stone courses. The west elevation mirrors the east; the rear, southern elevation is masked by later extension.

INTERIOR: The southern, larger schoolroom has a complex close-boarded roof. The architect has made a feature of the cross-shaped roof by interlacing the timbers at the intersection of the scissor-braced roofs which cover the main body of the room and the transepts. The trusses rest on rounded moulded corbels. There is a large double doorway to the south (rear) and two single doorways to either side of the stack on the north wall, giving access to the corridor, all of which are under brick segmental arches. A doorway has been inserted to the left of the stack. Both schoolrooms have brick fire surrounds with brick gather and flue and mantel shelf on heavy stone brackets. The north, smaller, schoolroom has a simple scissor truss, again resting on moulded corbels and doorways to each side corridor.

HISTORY: The rapid growth of Boscombe from 1870 onwards necessitated increased educational provision; the small school attached to the Church of St Clements was soon overwhelmed. By the mid-1870s it was felt that another, non-denominational, facility should be provided and the school was duly built in conjunction with the British and Foreign Schools Society. The foundation stone was laid on August 21st 1878 by Sir Percy Shelley (the son of Percy Bysshe Shelley and Mary Shelley), who lived locally in what is now called Shelley Manor. The school was officially opened in 1879 and consisted of two rooms - the larger one to south for older children. It quickly became too small for purpose and was extended to the south a number of times between 1895 and 1903, at which point it became a council school. It continued in use as a school until c.1960s when was used as a children's theatre, and from the 1990s was run by Bournemouth Borough Council as an adult education.

REASON FOR DESIGNATION DECISION
The earliest part of Boscombe British School, built in 1878, is designated Grade II for the following principal reasons:
* The quality and combination of materials used and the attention to detail of the architectural handling of exterior is noteworthy for such a small school.
* This detailed Gothic design is continued internally, especially in the larger schoolroom with its complicated roof.
* Despite some alterations the plan form is still clearly legible and later extensions to the south (not included in the listing) have not undermined its interest.
* The school contributes well to the street scene, surrounded as it is by contemporary Victorian artisan housing.
* It is an integral part of the early development of Boscombe as a seaside suburb.