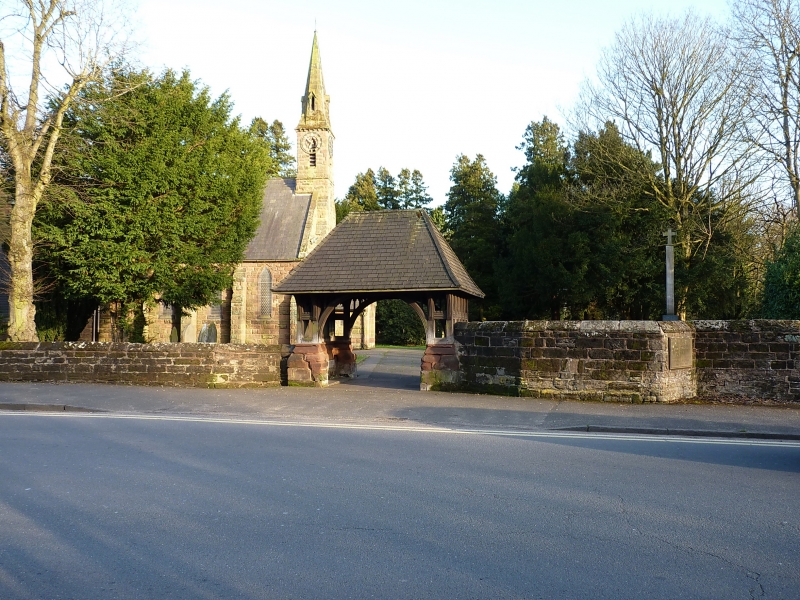 II
The Anglican Christ Church was designed by A. E. Perkins, in the Early English style. It was built in 1848. The west tower was completed in 1896.

PLAN: Cruciform plan with nave, chancel, north and south transept, west tower and west gallery and south gallery to chancel. There are no aisles.

EXTERIOR: The west end consists of a slender stone tower with broach stone spire with lucarnes. A gable end porch, with pointed arched doorway, projects from the base of the tower. The four bay nave has four lancet windows divided by buttresses. There are pairs of lancet windows to the transept gable ends; a triple lancet window to the east end and a single lancet window to the west end, above the porch. There are angle buttresses at the corners with set-offs. To the north transept is a lean-to vestry and to the south transept is the church office with gallery above. To the south wall are a pair of windows within moulded red sandstone pointed arch openings with splayed stone cills.
INTERIOR: Exposed grey stone with pointed stone arches to the four sides of the crossing. To the nave is an arch-braced collar-rafter roof with king post, with the rafters exposed and painted white in between. The west gallery has a panelled front and is supported on wooden posts. Beneath the gallery are two small rooms with a glazed screen arcade. To the nave are C19 pews enclosed by small doors at the ends. The chancel has an elaborate geometric tiled floor, choir stalls and inserted C17 panelling which conceals the east window. The Baroque panelling is richly carved with gilded garlands and putti with sedilia to the south and north side of the sanctuary. The stone pulpit has stone arcading with marble shafts; the octagonal stone font to the south transept has chamfered detailing to the bowl. The stained glass memorial windows are dated 1861, 1873, 1874, 1877 and 1879.

SUBSIDIARY FEATURES: To the north-east of the church is the 1880 lychgate. The church retains its boundary wall and has a substantial cemetery.

HISTORY: Christ Church was built in 1848 at a cost of £1550, and was consecrated on the 28 March 1849 by the Bishop of Worcester. It is reputed that the stones used in the construction came from a manor house in Bromsgrove. The 1880 pulpit and lychgate are memorials to Christ Church's first vicar, Alfred Clifton. The church clock and bell were completed in 1896. The brass lectern was given in 1897 to commemorate the diamond jubilee of Queen Victoria. The sanctuary was enlarged in 1910. The inserted C17 panelling to the chancel was initially given by the Earl of Denbigh to St Bartholomew's Church, Birmingham and may originally have been made for his C17 family home, Newnham Paddox (demolished, 1952).

SOURCES: N Pevsner and A Wedgwood, The Buildings of England : Warwickshire (2003) 215

REASONS FOR DESIGNATION: Christ Church is designated at Grade II for the following principal reasons:
* It is a good example of a modest church designed by the architect A. E. Perkins in the Early English style and clearly exhibiting architectural quality
* It contains C17 panelling of exceptional quality
* It has a good suite of furnishings including the pulpit, font and pews
* It has good stained glass memorial windows from the mid- to late C19

Christ Church is designated at Grade II, for the following principal reasons:
* It is a good example of a modest church designed by the architect A. E. Perkins in the Early English style and clearly exhibiting architectural quality
* It contains C17 panelling of exceptional quality
* It has a good suite of furnishings including the pulpit, font and pews
* It has good stained glass memorial windows from the mid- to late C19