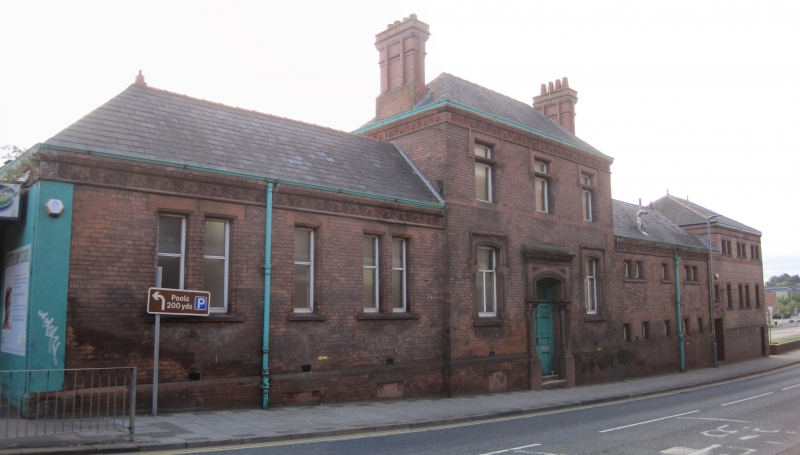 II
Turkish Baths 1909 by the County Surveyor WC Marks; built by William Johnstone of Carlisle with an interior tiled decorative scheme by Minton and Hollins of Stoke. All other work was carried out by local firms. Other parts of the James Street Baths are not of special interest.

PLAN: a series of interlinked rooms with basements attached to the south-east side of a pre-existing public swimming baths. The west part is a single storey entrance block providing an access corridor and attendant's room with former waiting areas. This gives access to the main block forming a double height cooling room leading to a single storey block housing access to the plunge bath flanked by the shower room and Russian vapour bath. The shampooing room is housed in a two-storey block beyond which gives access to similar blocks containing the three warm rooms.

EXTERIOR: west elevation (the only side of the building originally visible from the exterior): now obscured by a later two-storey block with a hipped roof of slate incorporating the original access corridor which is now entered through a plain entrance with a modern door from James Street. South Elevation: a double height, single-bay square building with a pyramidal roof containing four large thermal windows with mullioned frames and four rectangular roof lights; a decorative lantern surmounts the apex of the roof. A small two-storey toilet block with a hipped roof projects to the left with the attendant's room, also hipped,to the rear. To the right are separate but linked plain L-shaped two-storey blocks with pitched roofs.

INTERIOR: the entrance block comprises an access corridor with original doors, glazed fan and margin lights, and the attendant's room (now incorporating a former corridor with provision for waiting and lockers), with a corner fire breast, original store cupboard and plain cornicing. A horse-shoe arched entrance in the north east corner has a moulded architrave and an upper fan light of decorative stained glass which leads to the main cooling room. This is the centrepiece of the scheme and is complete with its original stepped plunge bath entered through a horse-shoe arched opening, flanked by rectangular doors, all of which have surrounds of alternating green and yellow tile. The plunge bath is of concrete construction faced with white glazed bricks. Flanking the north and south walls there are sets of five double and single changing rooms separated by polished wooden screens with art nouveau stained glass panels in their upper parts. Extensive use is made of fine tiling and glazed faience work with shades of pale green, pale blue and buff glazes; also incorporated at intervals are paired tiles of art nouveau design. The flooring throughout is of Terrazzo paving. This scheme, combined with the incorporation of horse-shoe arches carried on decorative columns with ornamental capitals, creates a strong Oriental atmosphere.

HISTORY: The first Turkish baths to have been built in the British Isles was in 1857 in Blarney, County Cork and the first in England was in London was in 1860. Subsequently many hundreds were constructed, often as part of publicly funded swimming facilities although only around 20 examples remain in England today.

Plans for the provision of Turkish baths in Carlisle occurred as early as 1884 when the existing public swimming baths were opened. The idea was resurrected in 1901 and agreed in 1902 although it was a further six years before plans were finally approved. The Turkish baths opened on the 20 September 1909 in a purpose built extension to the existing public baths building at a cost of £2500. The internal tiling and glazed faience work by Minton and Hollins Co. of Stoke, one of the leaders in the field of tile manufacture. The opening of the suite was celebrated in the local newspapers, which describes in detail a public inspection, although there was no formal opening. Entry cost between I and 2 shillings depending on the time and day of the week and bathing was expected to take c. 1.5 hours. The Turkish baths remain open and in use to the present time (2009).
SOURCES
http://www.carlislehistory.co.uk/carlislehistoryj.html accessed on 24 Sep 2009
Carlisle Journal 17.09.1909 p5
Carlisle Patriot 04.01.1901 p4f (Turkish Baths for Carlisle)
Carlisle patriot 10.09.1909 p5a (Description of the building)
'Original plans for Carlisle Turkish Baths', 1908, Carlisle Archives, CA/E4/13945
http://www.victorianturkishbath.org/ accessed on 24 Sep 2009
Ian Gordon and Simon Inglis, Great Lengths: the historic indoor swimming pools of Britain (2009)
SPAB 'Taking The Plunge-The Architecture of Bathing' 16

REASONS FOR DESIGNATION DECISION: This set of Edwardian Turkish Baths constructed in 1909 is designated for the following principal reasons:

* Decorative Scheme; the original internal decorative tiling and glazed faience work by the respected company Minton and Hollins of Stoke, notably in the cool room, is of good quality and complete
* Intactness: alterations are few and the original plan of the baths remains intact which renders the Turkish Bathing process highly readable.
* Rarity: this building is an increasingly rare example of a once common building form, of which only around 20 remain in England; it compares very favourably with the eight existing listed Turkish Baths.

This set of Edwardian Turkish Baths constructed in 1909 have been designated for the following principal reasons:

* Decorative Scheme; the original internal decorative tiling and glazed faience work by the respected company Minton and Hollins of Stoke, notably in the cool room, is of good quality and complete
* Intactness: alterations are few and the original plan of the baths remains intact which renders the Turkish Bathing process highly readable.
* Rarity: this building is an increasingly rare example of a once common building form, of which only around 20 remain in England; it compares very favourably with the eight existing listed Turkish Baths.