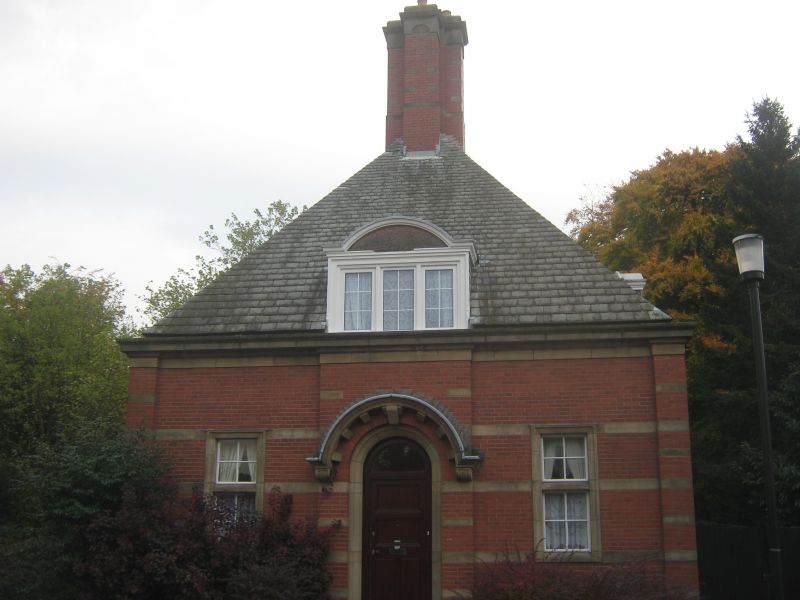 A lodge, gate, gate piers and walling to Birmingham University campus, built to the designs of Aston Webb and Ingress Bell, between 1904 and 1909.

MATERIALS: Both lodge and walling are of red Accrington brick, laid in English Garden Wall bond with ashlar dressings of Darley Dale stone. The pyramidal roof is of graduated, green, Westmoreland slates. The gates are of cast and wrought iron and lanterns at either side of the gateways are of bronze with copper domed roofs.

PLAN: The walling borders the roadside and the gates are recessed, with quadrants of walling to either side connecting with the roadside. The lodge is square on plan and of two storeys, with a rectangular, walled yard to its east side.

EXTERIOR: There are three gateways, the central one for road traffic and the lateral pair for pedestrians with ashlar piers between them. The central gateway has a single gate which is hinged at west and to either side of it are short iron screens. The coat of arms of the university in high relief is set in an arched panel on each side of the gate. The pedestrian gates are plainer and all gates have dog bars to their lower bodies. The stone piers are rectangular in plan and have a dentilled band below the cornice. The pedestrian gates have moulded surrounds with prominent keystones and there are octagonal electric lanterns to the tops of their piers. Walling at either side of the gates is ramped, but the pattern for the rest of the walling is uniform, with stone piers dividing the wall into bays. To the east of the gate recess are four bays and at west are twelve bays, although the wall formerly stretched further to the west and has now been demolished beyond the twelfth bay. A balustrade to the top of the wall has rectangular balusters and a simple, cambered coping. The lodge is set back to the north-east of the gateway, but is connected to the walling by a pair of wooden gates on its south side.
The walling of the lodge on all sides is of garden wall bond with three rows of stretchers to one row of headers, and set into this are flush bands of ashlar. All four corners have clasping buttresses and the centre bay on the north, south and west faces each projects. The west (entrance) front is symmetrical with three bays. To the centre is a doorway with arched fanlight and above it is an arched, stone hood which is supported by carved brackets to the sides and further plain brackets and a keystone. The three-panel door is a replacement of later-C20 date. At either side of this central feature are single-light windows, each with a moulded stone surround and a transom, into which uPVC windows have been inserted. The first floor dormer window has a moulded wooden surround and a segment-arched top into which uPVC windows have been inserted, as before. The graduated slates of the roof rise to a central stack of cross-shaped plan. The south front is similar, but has no window to left of centre at ground floor level and has a cross window of two mullioned and transomed lights to the centre at ground floor level. The northern flank is also similar, save that the right-hand bay is blank and the left hand bay has a cross window. On the rear (east) face, the central bay does not project, but there are two projecting pilaster buttresses at either side of the central bay which has a single-light casement. The yard walling continues the banding seen on the rest of the building and encloses a single-storey laundry, boiler room and coal store. The window to the south flank of this yard building and the door to the north have both been replaced in the later-C20.

HISTORY: The lodge and gates and walling are part of the overall plan for the University of Birmingham as conceived in 1900 by Aston Webb and Ingress Bell.
The university had started in 1880 as Mason College in Edmund Street, specialising in the sciences. It became Mason University College in 1898 and received its charter in 1900, at which time Joseph Chamberlain was appointed as its first chancellor. The same year Lord Calthorpe gave 25 acres of land on his Edgbaston estate and Andrew Carnegie donated £50,000 to establish a 'first class modern scientific college' on the model of Cornell University. A matching sum was given by Sir Charles Holcroft. Although not all of the planned buildings were eventually built, the extensive scheme designed by Webb and Bell was approved in full. The campus was opened by King Edward VII in 1909.
The lodge housed the gate keeper to the university campus. It is not shown on the Ordnance Survey map published in 1904, but is shown with its exact, present footprint on the OS map for 1917. A bathroom was added in the later C20 and uPVC windows have been inserted into some openings, although the original surrounds, either wood or stone, have been retained. The walling to the west of the gates has been curtailed in the early C21 and will be re-built on a new line to the north using original materials where possible.

* Architectural: The buildings, designed by Aston Webb and Ingress Bell, have clear architectural quality and a stylistic relationship and group value with the principal buildings at the heart of the campus.
* Historic Interest: Birmingham was the first campus university in England and this formed one of the principal entrances to the landscape of the site.
* Intact state: Despite some alteration to the fenestration and the curtailing of a length of the original boundary wall to the west, the group remains in largely original condition, with notably little alteration to the plan of the lodge.

The University of Birmingham Lodge, Gate, Gate Piers and Walling, Bristol Road, Birmingham are recommended for designation at Grade II for the following principal reasons:

* Architectural: The buildings, designed by Aston Webb and Ingress Bell, have clear architectural quality and a stylistic relationship and group value with the principal buildings at the heart of the campus.
* Historic Interest: Birmingham was the first campus university in England and this formed one of the principal entrances to the landscape of the site.
* Intact state: Despite some alteration to the fenestration and the curtailing of a length of the original boundary wall to the west, the group remains in largely original condition, with notably little alteration to the plan of the lodge.