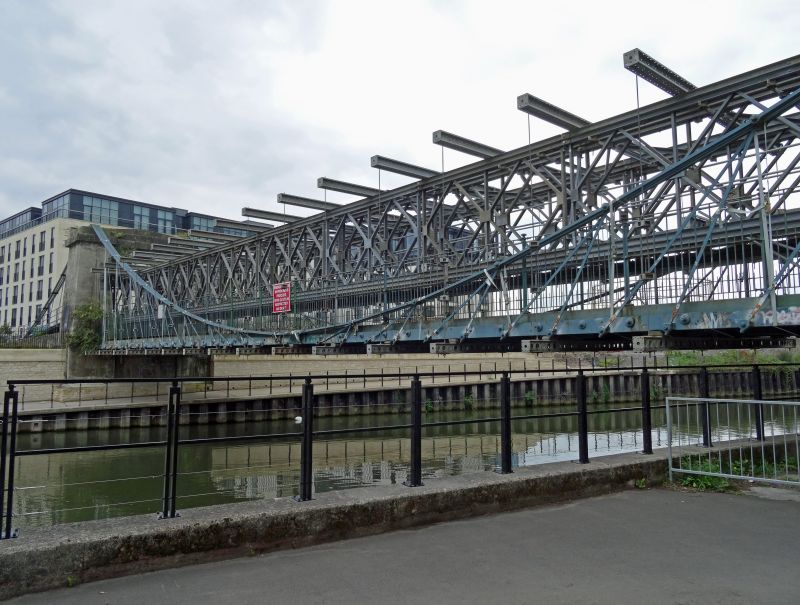 Suspension bridge. 1836. By James Dredge, engineer.
MATERIALS: Limestone ashlar and wrought iron.
EXTERIOR: Single span suspension bridge with plain classical ashlar arches on either bank, attached pylons on each side of segmental arch, plain blocking course and pedimented entablature. Treatment same on both faces. Arches carry suspension chains made up of seven flat wrought iron links rivetted together at intervals. Suspension rods tensioned at different angles, and are Dredge's Patent (see cast iron plaque on bridge, which reads `DREDGE PATENTEE BATH'). Deck made of wrought iron girders and carries wooden roadway been tarmacked and flanked by iron safety railings.
HISTORY: The bridge employs a suspension system first used by Captain Brown on the Union Bridge near Berwick-upon-Tweed, which dates from 1820. `The load on the suspension cables was balanced evenly by arranging them at increasingly acute angles to the main catenary cables as they approached the centre of the bridge' (Buchanan). This bridge is now used only for foot traffic, but nonetheless remains an important survivor (in largely unaltered condition) among early suspension bridges. The bridge was completed in December 1836, but named for accession of Queen Victoria in 1837. Dredge, a local engineer, had submitted a comparable design to the Clifton Suspension Bridge competition, won by Brunel. It was repaired in the 1940's. The bridge, an impressive example of Neo-classical masonry as well as of innovative iron technology, is also a monument to the heavy engineering, which was associated with West Bath from the early C19.
SOURCES: R.A. Buchanan, `The Industrial Archaeology of Bath' (Bath 1969), 10.