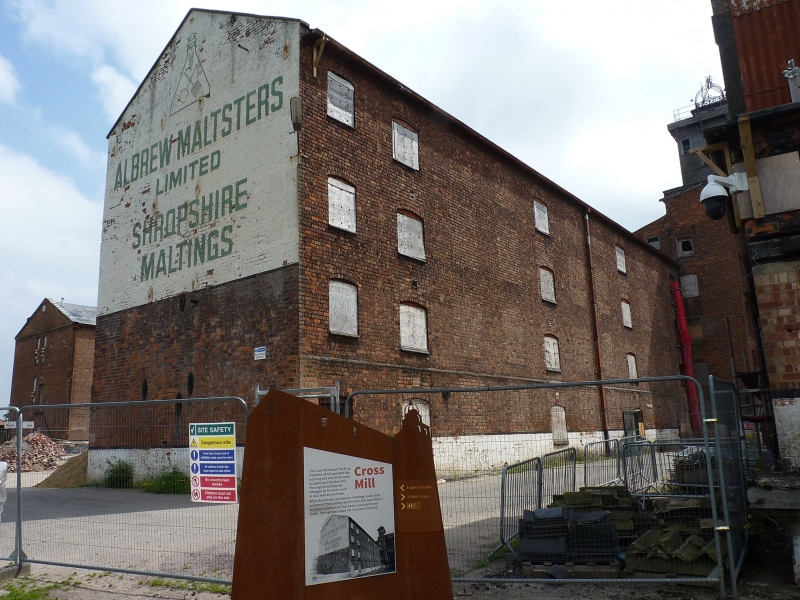 Church of England Parish: Shrewsbury All Saints and St Michael

Heckling building of 1812 which may incorporate some late-C18 fabric; altered late C19 during conversion to a maltings. Part of a former flax mill designed by Charles Bage, and owned and operated by Marshall, Benyon and Bage.

Heckling building of 1812 which may incorporate some late-C18 fabric; altered late C19. Part of a former flax mill designed by Charles Bage, and owned and operated by Marshall, Benyon and Bage. Constructed in two major phases of 1796-7 and after a fire in 1809, with later additions and alterations. Converted and extended to a maltings in 1897-8; closed in 1987.

PLAN: rectangular in plan and aligned west to east. It has a projecting five-storey stair block which has a link passage through to the Spinning Mill at its east end. It forms part of a group of attached buildings which developed sequentially, comprising the Spinning Mill, CROSS BUILDING and Flax Warehouse, and all subsequently linked by the addition of the late-C19 maltings Kiln.

EXTERIOR: a twelve-bay building of four storeys with an attic. There is a dentilled eaves cornice and a stone chamfered string course at first-floor level to both north and south elevations. The original pattern of windows to each of the bays on these elevations are evident, though two out of every three are completely blocked and the third is reduced in height and width and contains a late-C19 timber malting window. The south elevation of the east stair block has a ground-floor entrance and each of the upper floors contains a window, all under segmental-arched lintels. Its left return has a similar window arrangement, including one to the ground floor. The west gable end carries painted lettering: ‘Albrew Maltsters Limited Shropshire Maltings’ and has a number of blocked openings, most of which are only visible internally. The third floor of Cross Building was linked to the adjacent Flax Warehouse by a chain suspension bridge (removed) whose position corresponds with an opening containing a pair of timber doors towards the left-hand end of the north elevation.

INTERIOR: the principal access to each floor is from the east stair block. There are two rows of slender cast-iron columns on each floor which support three-piece floor beams and the shallow, brick jack arches which spring between the beams. The floors have a concrete screed, laid when the building was adapted to malting floors. Blockings in the east wall at second-floor level provide evidence for the power transmission system from the north engine house of the Spinning Mill. The cast-iron roof structure comprises two-piece trusses, purlins and short, T-section rafters which slot into the middle rank of purlins. The rafters are timber.

Ditherington Flax Mill on the north-eastern outskirts of Shrewsbury town centre was built by a partnership of local merchants, Thomas and Benjamin Benyon, and Yorkshire entrepreneur, John Marshall, for the processing of flax into linen yarn and thread. However, the partnership later suffered from internal stresses and in 1804 the Benyons left to set up rival factories, and Marshall ran Ditherington Mill, in time with his sons and grandsons, until the failure of the business in 1886. Shrewsbury was not an area synonymous with the textile industry, but proposals to build two canals, authorised by Acts of Parliaments in 1793, to serve the town were expected to greatly improve its transportation links. Only one, the Shrewsbury Canal, was actually built and its route appears to have been altered to run parallel to the site of Ditherington Mill. In terms of infrastructure the canal, which opened a few days before the contract for the flax mill was completed, promised a reliable supply of coal and a source of water for the mill. Its construction was, therefore, probably a key factor in enabling the mill to be built in this location.

Construction of the flax mill commenced in 1796 and production began in 1797. The mill was erected in two main building campaigns: the first following the agreement in 1796 to purchase the site, and the second after 1809, following the addition of new buildings and rebuilding after a destructive fire. From the start it was equipped with the full range of processes for spinning yarn and thread from raw flax, with machinery arranged into separate departments for flax dressing, preparation, yarn spinning and thread twisting. Ditherington Flax Mill provided employment for thousands of workers over the course of its operation, contributing markedly to the local economy.

The site was entered, as today (2015), from the south end, where gates opened into a yard bounded to the south and west by a packing warehouse (demolished 1979), stables, and a smithy and offices. Immediately to the north was the operational core of the factory, an L-shaped complex made up of a five-storey main mill building (the Spinning Mill) situated adjacent to the Shrewsbury Canal and aligned north to south, and a four-storey with attic wing (Cross Building) extending west at right angles from the north end of the main mill. At the either end of the main mill were engine houses which accommodated the steam engines that provided power to the complex. To the east, extending along the narrow space between the main mill and the canal (since infilled), were two boiler houses which are no longer extant. To the west of the main mill was a dyehouse and stove house, the latter used for drying materials after dyeing. To the south of the stove house was a drying shed (demolished). To the north, beyond the main mill, was a warehouse, with an apprentice house beyond that. At the north end of the site was a gasworks which has been demolished.

At right angles to the main mill (Spinning Mill) a second multi-storeyed building, known as the CROSS BUILDING, was constructed during the flax mill’s first years of operation. It was built probably in 1799 and was certainly in operation by 1803. It initially housed hand-powered heckling apparatus (a process of combing raw flax in preparation for spinning) and was also used for storing raw flax and heckled line (longest and most valuable grade of flax fibre) and tow (shorter-length flax fibres separated from line flax). The close functional relationship with the Spinning Mill explains their proximity. The building was not constructed in fireproof form, and in October 1811 it was destroyed by a fault in the newly-installed gas-lighting system. The building’s importance to the whole working of the mill is reflected in its immediate rebuilding which was completed in 1812. Like the Spinning Mill, the rebuilt Cross Building was iron framed, but incorporated important modifications in its fireproof construction and in its roof which has cast-iron rather than timber trusses. It is constructed of ‘great’ bricks probably re-used from the building it replaced, and has fireproof staircases at either end, rising the full height of the building. The east staircase block has a link passage on each floor through to the adjacent Spinning Mill; the top floor passage though is a later addition. After it was rebuilt the Cross Building continued to be used chiefly for heckling, on the top two floors, but also accommodated yarn winding on the first floor. In the 1830s an attic room was created which was used for sorting line flax, and the heckling and related machines on the other floors were powered by line shafts driven from the Spinning Mill.

By 1812 Ditherington Flax Mill contained all the buildings, apart from a dedicated bleachworks, required in a flax mill specialising in the production of yarn and thread, and between 1813 and the early 1820s a limited amount of weaving was also carried out at the site. Few new buildings were added after 1812, though changes to the steam-power plant necessitated the construction of new boiler houses. A more extensive programme of reorganisation and re-equipping was carried out in the 1820s and 1830s so that the business could remain competitive and up-to-date, but no new major buildings were constructed. Changing markets for linen goods and increasing competition, particularly other manufacturers in Scotland and Ireland, from the mid-C19, threatened the company’s pre-eminence. Management changes, better integration and marketing, and some investment failed to improve the company’s fortunes and the flax mill closed in October 1886.

In 1897 the site was purchased by William Jones of Shrewsbury and adapted for use as a maltings and became known as the Shropshire Maltings. All but the attic floor of the CROSS BUILDING was converted to maltings floors, and steeps (where the barley was soaked) were installed at the west end of the building. The attic floor was used for storing barley until about 1950.

William Jones & Son went bankrupt in 1933-34 and the business was then administered by Alliance Insurance Company which was itself taken over by Ansells in 1948. During the Second World War the site served as a barracks for the basic training of infantry recruits, but malting resumed in the post-war years. Due to the challenges facing traditional floor malting operations from purpose-built maltings facilities, however, as well as its aging plant and constrained site, Shropshire Maltings could not compete against modern factories and closed in 1987.

The Cross Building at Ditherington Flax Mill, erected in 1812 and altered in the late C19, is listed at Grade I for the following principal reasons:

* Technological interest: as one of the country’s oldest surviving iron-framed buildings which illustrates improved methods in this type of construction, particularly the rapid development of cast iron as a structural material in the first decade of the C19;
* Historic interest: for its association with Charles Bage, an important figure in the development of iron-framed, multi-storeyed buildings;
* Group value: as a significant component of a steam-powered textile mill that has a strong functional and spatial relationship with other listed buildings.