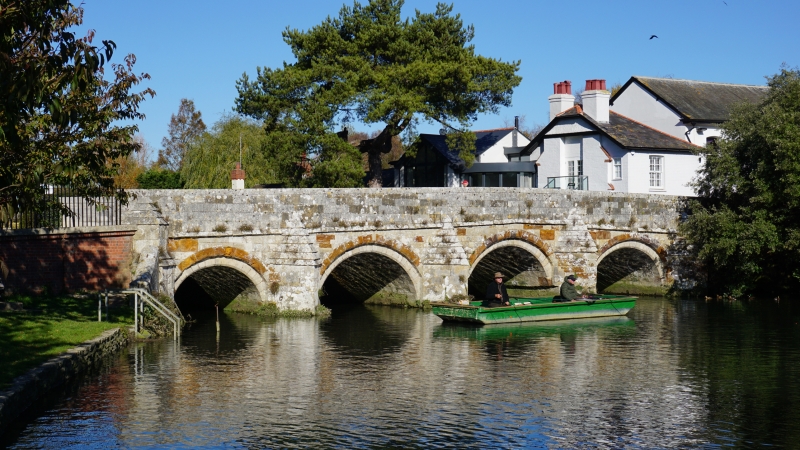 Road bridge over River Avon. Erected in the C15 or C16; repaired and strengthened over the centuries, including widening around 1900 and the erection of footbridge (not included in the listing) on north side in 1950.

Road bridge over River Avon. Erected in the C15 or C16; repaired and strengthened over the centuries, including widening around 1900 and the erection of footbridge (not included in the listing) on north side in 1950.

DESCRIPTION: it is constructed of limestone and ironstone ashlar, although its north elevation is entirely of limestone. The bridge has five round-headed arches; those to the downstream (south) elevation are of two orders with inner voussoirs of limestone, like the body of the bridge, and outer ones of ironstone. The arches to the north side are flush with the face of the bridge. There is a pointed cutwater between each arch, six to the downstream elevation and four to the upstream side, and a parapet above. On the north side of the bridge is a mid-C20 cantilevered footbridge which has been anchored to the older structure and is not of special interest.

Multi-span bridges are structures of two or more arches supported on piers. They were constructed throughout the medieval period for the use of pedestrians and packhorse or vehicular traffic, crossing rivers or streams, often replacing or supplementing earlier fords. During the early medieval period timber was used, but from the C12 stone (and later brick) bridges became more common, with the piers sometimes supported by a timber raft. Most stone or brick bridges were constructed with pointed arches, although semicircular and segmental examples are also known. A common medieval feature is the presence of stone ashlar ribs underneath the arch. The bridge abutments and revetting of the river banks also form part of the bridge. Where medieval bridges have been altered in later centuries, original features are sometimes concealed behind later stonework, including remains of earlier timber bridges. The roadway was often originally cobbled or gravelled.

As with most medieval bridges, the original date of construction for Town Bridge, Christchurch is not known, but it would appear to date from the C15 or C16. A bridge is depicted in this location on Saxton’s map of 1575, and there are references to Christchurch Corporation expending small sums on the bridge at the beginning of the C17. Town Bridge, which is sometimes referred to as Quartley's Bridge after a former mayor of Christchurch, crosses one of the two (western) channels of the River Avon and is situated on the principal eastern road out of the town, a route that has been in existence since at least the C13, and probably even earlier. It is, therefore, likely that Town Bridge stands on the site of an earlier river crossing. There have been various repairs over the centuries, including refurbishment of the bridge and replacement of the parapet wall in 1834-38, and widening on its north side in 1899-1900. The easternmost arch, which had been blocked, was reopened in about 1930. Further repairs and strengthening were carried out in 1937-38, and a cantilevered metal footbridge, constructed by Messrs Bryant and Trowbridge, was added on the north side in 1950.

Town Bridge, a multi-span bridge of the C15 or C16 that was widened around 1900, is listed at Grade I for the following principal reasons:

Architectural interest:
* a significant survival of a medieval bridge which retains the majority of its early fabric;
* it is a neatly-made structure with very well constructed arches to the spans and deep, pointed cutwaters.

Historic interest:
*its medieval characteristics are still evident, illustrating medieval bridge building techniques; and its widening in c.1900 provides evidence for the continuing importance of this route into Christchurch.

Group value:
* with a high number of listed buildings including the adjacent Redford Bridge (Grade I), Nos. 1, 2 and 4 Bridge Street (all Grade II), and the remains of the Augustinian priory and castle (scheduled monument) and the constable’s house (Grade I) to the south-west.