A Category A Listed Building in Kirkoswald, South Ayrshire 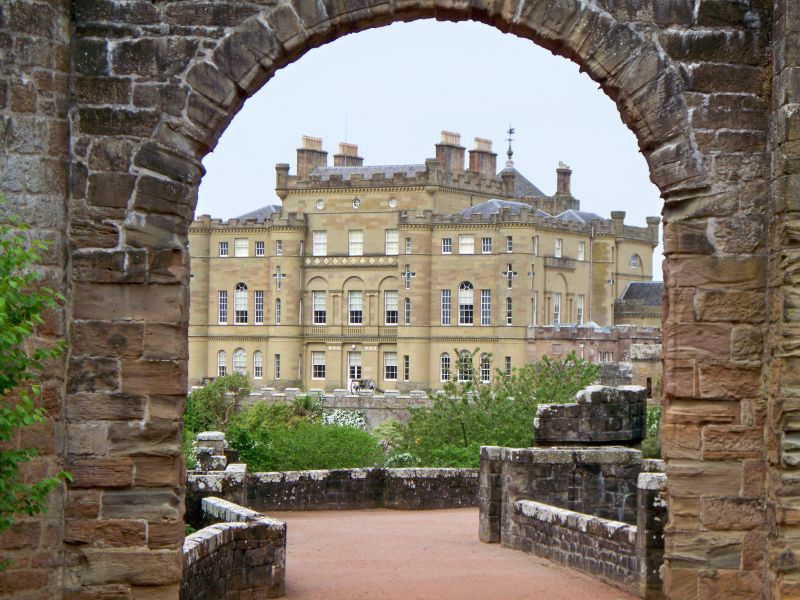 Together with the outstanding ornamental landscape of its estate, Culzean Castle is acknowledged as the epitome of the Picturesque movement in Scotland, in its own right and is a work of international importance. While many theorists of the Picturesque stressed informality in architectural composition and landscaping, as opposed to the dominant trend of Neo-classicism, Culzean manages to combine formal regularly ordered features with fanciful and implausible elements, as well as genuine ancient fragments. The dramatic clifftop site lent itself particulary well to this approach, evoking notions of the sublime power of nature that underpinned the Romantic sensibility.

Although a number of architects contributed to the clifftop ensemble, including later 19th century additions, the Castle, together with the Stable Court and Home Farm form an essential part of Robert Adam's oeuvre (see separate listings). Adam built, or rebuilt 12 country houses in the castellated style, 10 of which were in Scotland, perhaps indicating a national preoccupation. And each castellated house had slightly different combinations of features. Caldwell House (1771), in Renfrewshire, had crenellation and pepperpot turrets, while Oxenfoord (1780) had round towers and crenellation. Mellerstain was regular in elevation, with a crenelated parapet. At Culzean, Adam used the full vocabulary. The S façade of Culzean, sees the architect transforming a well-ordered classical composition into a whimsical mannerist castle. The round towers are like giant order columns, their cyclopean arrow slits serving as windows. The dentilled cornices and string courses reveal themselves as dummy machicolation on closer observation. This permits the effortless application of pilasters and Serliana, although the latter is actually a deceit as it relies upon dummy windows. As at Drumlanrig, the pepperpot turrets denote the ancient building at its core. The N side, which looks over the Clyde Estuary, by comparison, is asymmetrical and less regular, seemingly inspired by Claude Lorraine and Salvator Rosa, allowing the architect to create in stone the Romantic fantasy of his landscape drawings.

Commissioned by the 10th Earl of Cassillis, in 1776, Adam was presented with an L-plan tower house with various extensions and detached offices, including a kitchen block on the NE built for the 9th Earl in 1766. The tower was regularised, the kitchen wing absorbed and there were extensions to the N and NW. Adam's transformation of the building was achieved in a number of stages, and it appears to have only been finally completed by the 12th Earl in the second decade of the 19th century, when both the original patron and the architect were dead.

In 1877 the 3rd Marquess of Ailsa initiated an ambitious scheme of internal alterations, refurbishment and extension engaging the Edinburgh architects Wardrop and Reid and decorators Jackson & Sons, of London, and Bonar & Carfrae, of Edinburgh. A new 3-storey nursery wing was built on the W, replacing the former brew house wing, with only the lower storeys retained, and a new porch was built on the east side of the Castle, thus enlarging the entrance hall and providing new offices. The former buffet room and dining room were slapped through to make a new sitting room, while the Adam library and a former dressing room were joined together to create a new larger dining room, with French windows to the garden terrace added. Great care was taken to ensure the new rooms were in style with the Adam interiors, and various fixtures and fittings were re-used in new locations. Adam's later N range, with the circular rooms appears to have neen left largely intact, however, as was the spectacular elliptical staircase (1788-1812), the culmination of Adam's work at the castle. The Wardrop and Reid exteriors borrowed features from Adam's design, such as the crenellated machicolated parapet, and replicating the glazing, however, it is clearly a work of Victorian taste incorporating elements of the Baronial, such as corbelled bartizans and canted bays, that Adam had eschewed.

After the Castle and policies passed from the 5th Marquess to the National Trust for Scotland in 1945, a visitor apartment was created for General Eisenhower on the upper floor. This was followed by various schemes of internal redecoration and, in the 1960s, the W wing was converted into flats for letting. No external alterations have been made since the 19th century, however and the building has benefitted from extensive stone restoration.

Culzean, at one time the largest estate in Ayrshire, has been associated with the Kennedy family since the Middle Ages. It was gifted by Gilbert the 4th Earl of Cassillis to his brother Thomas Kennedy, in 1569. In the 1660s, the barmekin around the tower house was breached to create the terraced gardens, orchards, and walled garden for which Culzean was notable, while the caves beneath the castle (now a scheduled monument) were fortified to serve as secure stores. Culzean Castle became the principal family seat when Sir Thomas Kennedy (1726-75) became the 9th Earl of Cassillis, in 1759. A continuing programme of improvements was undertaken by Sir Thomas and his successors during the 18th and 19th centuries. The 10th Earl began rebuilding the Castle to designs by Robert Adam. This work was continued by Archibald (1770-1846), the 12th Earl, later the 1st Marquess of Ailsa. From about 1810 onwards he commissioned numerous structures, both practical and ornamental, and several important architects and landscape designers were engaged to embellish the gardens and grounds with ponds, gates, lodges and pavilions, resulting in several key works of the Picturesque era. The 3rd Marquess undertook the modernisation and enlargement of the Castle in the 1870s. In 1945, the 5th Marquess of Ailsa divided the property, making over the Castle, and the policies immediately surrounding it, to the National Trust for Scotland.

Robert Adam (1728-1792) was one of the most prominent architects of his generation and, for a time the most fashionable architect in Britain. He helped to usher in the neoclassical taste that superseded Palladianism and created a refined style of interior design that came to bear his name. His castellated mansions set in Romantic landscapes, such as Culzean and Seton, helped define the picturesque movement and strongly influenced the design of Scottish country houses in the first half of the 19th century. With his family firm he undertook most types of architectural work, although large public commissions, such as Register House and Edinburgh University, only came towards the end of his career.

Wardrop & Reid was a continuation of the Brown & Wardrop partnership that came into existence when Thomas Brown died and chief draughtsman Charles Reid was assumed into partnership, in 1873. When Reid died in 1883 the practice merged with that of Rowand Anderson. James Maitland Wardrop (1824-82) had extensive contacts with the landed gentry that brought much work building, remodelling and extending country houses in a number of styles including French and Scots, as well as pioneering a Georgian revival. The firm also had a contract with the British Linen Bank and designed numerous county court buildings. Wardrop's sons Harry and Hew were involved with the practice during the 1870s and 1880s. Charles Reid was responsible for the new wing, porch and alterations to Culzean Castle.