A Category B Listed Building in Stirling North, Stirling 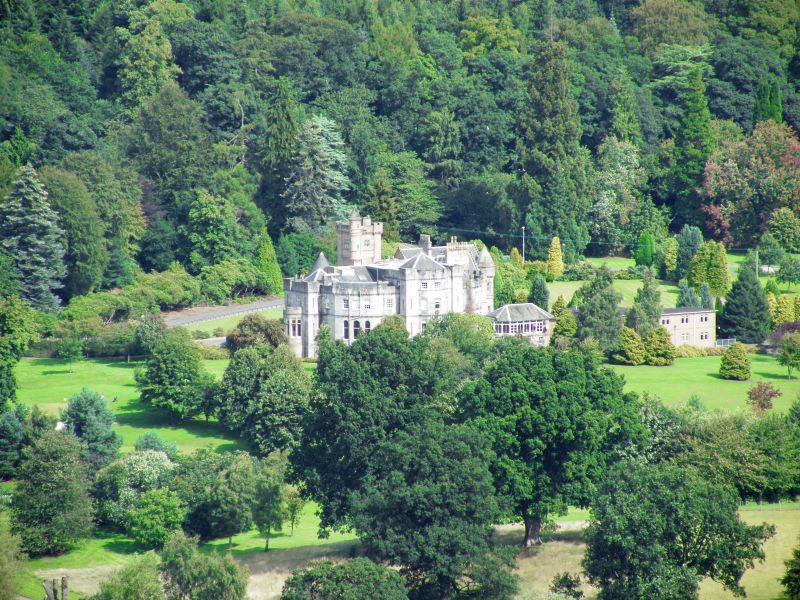 A good example of the later castle style of Robert Adam with a picturesque late 18th century composition as evidenced at the S garden elevation. The front elevation (N) was completely remodelled in the 1890s by David Thomson in a late Scots Baronial style which included an Italian Renaissance interior, although some of the Adam layout was retained. Both N and S elevations are good examples of their type, and retain an integrity of design as two discrete elevations.

Around the mid 20th century the building became a maternity hospital. The last phase of additions for the hospital sold off 98 acres of land in 1952 and at the same time began additions to the SE of the plan to provide accommodation for the nurses working in the maternity hospital housed in the adjacent former house. The conservatory was also remodelled at this point to provide a linking corridor, with some marble staues removed. When the University of Stirling was established in 1966 the building became part of the campus and passed into University ownership in 1969. It was used as offices and teaching space from this date to present.

The commission for Airthrey Castle was made by Robert Haldane who settled at Airthrey after his marriage to Katherine Cochrane Oswald. He spent ten years improving the landscape which included the excavation of Airthrey Loch. The initial designs from Adam were for a Neo-Classical scheme but Haldane preferred a later castellated design. He proved to be far from an ideal client and paid Adam off for the designs dealing directly with Thomas Russell who had built Seton Castle (see separate listing). He used the money he saved on architects fees to pay for droved ashlar at the ground floor. As the design was executed without the supervision of Adam the forecourt and interval towers were never realised. The estate was bought in 1889 by Mr Donald Graham for £75,000 who commissioned the remodelling of the N façade at a cost of £15,700.

Robert Adam (1728-1792) moved away from the strict regimentation of Palladian design towards designs which were self consciously picturesque with decorative classical interiors after his move to London from 1758 onwards. His response to the picturesque in Scotland often involved the use of castellated architecture, most famously at Culzean Castle (see separate listing). Adam's response to the site at Airthrey was initially classical but the castellated design is a direct response to the site set above the loch and with a backdrop of trees and crags. The sweeping curve of the S (garden) elevation is also an excellent example of his concept of movement in architectural design and the combination of rooflines and turrets with the curving façade are key parts of the composition. The original design also included a walled courtyard and turreted entrance, similar to that at Wedderburn (see separate listing).

David Thomson was a prolific architect operating predominantly in Stirlingshire and the West of Scotland. He worked mainly on Church, School and Country House work, including Benmore House and gate lodges (see separate listings).

(List description updated as part of a review of the University of Stirling Campus 2009).