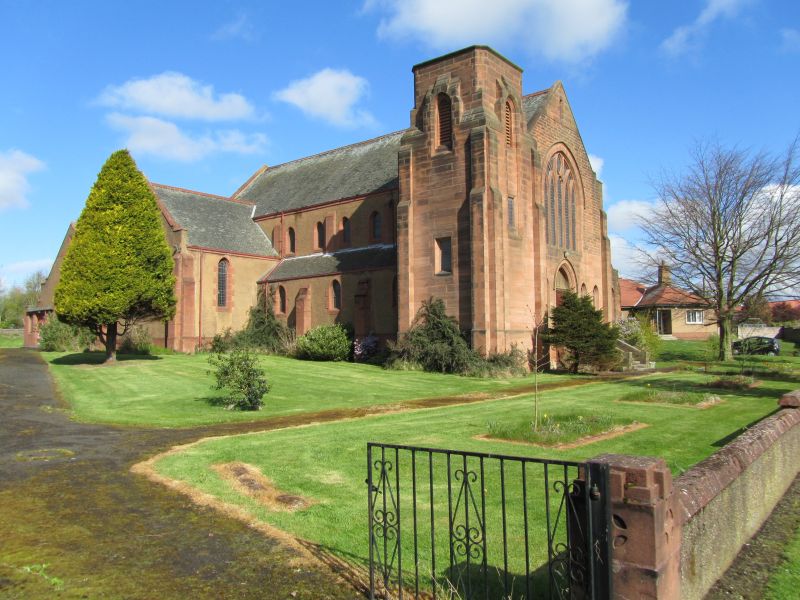 N (ENTRANCE) ELEVATION: broad, cross-finialled gable to right of centre with door and flanking bipartite windows at ground, hoodmoulded, 8-light transomed and mullioned window at 2nd stage with quatrefoil immediately above. Lower gable of hall to left with door to centre and windows in flanking bays.

E ELEVATION: single bay chancel projecting to centre with blocked round-arched door below hoodmoulded 6-light transomed and mullioned window, with oculus immediately above; return to left with bipartite windows to 1st and 2nd stages (that to ground blocked) at left, moulded panel to left and traceried window with 2 ogee-headed lights (blocked) to right of chancel projection; return to right with stone forestair leading to loft entrance in re-entrant angle. Recessed face to left of centre with large 4-light transomed and mullioned window (lower lights blocked) to right. Later hall with wide 4-light window projecting from recessed face to right of centre.

S ELEVATION: broad gable with blocked door flanked by bipartite windows to ground, and hoodmoulded 8-light transomed and mullioned window with quatrefoil immediately above in gablehead.

W ELEVATION: advanced gable to centre corbelled in over 1st stage; hoodmoulded, pointed-arch, traceried window (blocked) to 2nd stage and birdcage bellcote in gablehead; small bipartite window (blocked) on return to right, and similar window (also blocked) with adjacent door to right on return to left. Hoodmoulded, 4-light transomed and mullioned window to each flanking recessed face, that to right with lower lights blocked, and that to left with lower right light blocked.

Ecclesiastical building no longer is use as such. Originally rectangular in plan, the church was probably virtually rebuilt in 1528, with further upgrading in 1792 and 181O. After the Reformation the chancel became the Wemyss Aisle, at which time the round-arched door was probably added. The Robert Burn alterations included the addition of rectangular Tudor windows and probably the hoodmould over the W window. The Fife Free Press reported in 1893 that "after extensive repair and complete beautifying" Wemyss Parish Church was re-opened. The expense for this work was met by Mr Wemyss of Wemyss Castle, and Mr Tod was Clerk of Works. Until recently the bellcote had a weathervane in the shape of a swan (the Wemyss crest). The graveyard is listed separately, category 'B'.