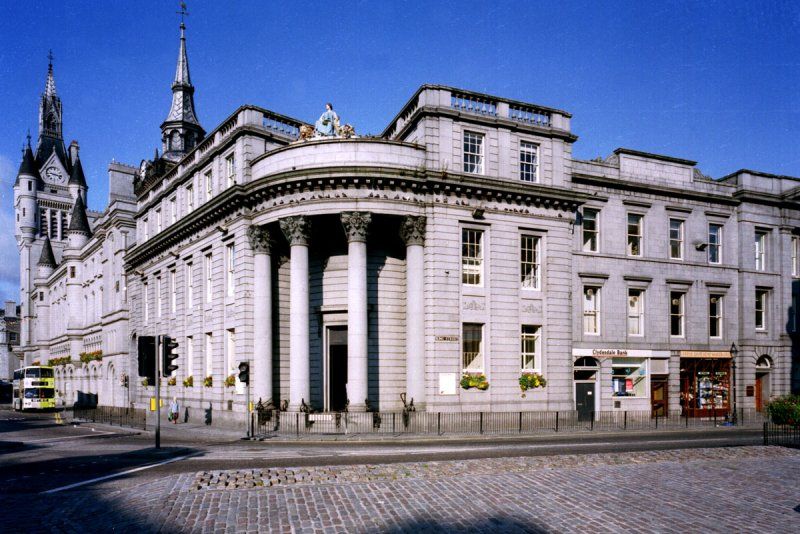 This is a strategic building by Archibald Simpson, one of Aberdeen's most celebrated architects, situated at the heart of the city on the axial corner between Castle Street and King Street and at the beginning of the major thoroughfare of Union Street. With elevations to two major streets, the impressive linking Corinthian-columned portico creates a landmark building which embodies the aspirations of the North of Scotland Bank. 19th century Aberdeen is characterised by quality Classical architecture of which Simpson was an assured exponent. The former bank is arguably the finest work in the city centre. The ground floor has a lavish interior scheme which including a Parthenon frieze and tessserae floors.

The building was the winning design in a competition, and it was built for the Head Office of the North of Scotland Bank. The foundation stone was laid in 1840.

The sculpture of Ceres, the Goddess of Plenty, was designed by local sculptor James Giles (1801-70) and shows the Goddess accompanied by a Cornucopia and a British Lion. The figure was modelled by Nelson Routledge Lucas and Company.

Archibald Simpson (1790-1847), along with John Smith, was one of the major architects involved in designing the expanding nineteenth century city of Aberdeen. A native of Aberdeen, he practised predominately with the North East of Scotland. He designed many of the important works in the city including St Andrews Cathedral, The Music Hall and 29 King Street (see separate listings).

Union Street and King Street were developed after 1794, when a town council meeting asked the engineer Charles Abercrombie to find a way to connect the original steep, haphazard network of Medieval streets of Aberdeen to the surrounding countryside. His plan was for two streets, one of which would run from Castlegate to the Denburn (Union Street) and the other which would run from the Castlegate to the North of the town (King Street). Planned as major thoroughfares in an increasingly wealthy and self-assured city, the streets were bold and confident projects some of which required major engineering to complete. The buildings which aligned them had to reflect a sense of grandeur and confidence as the visual appearance of the street was of the utmost importance.

Currently restaurant with offices above (2006).