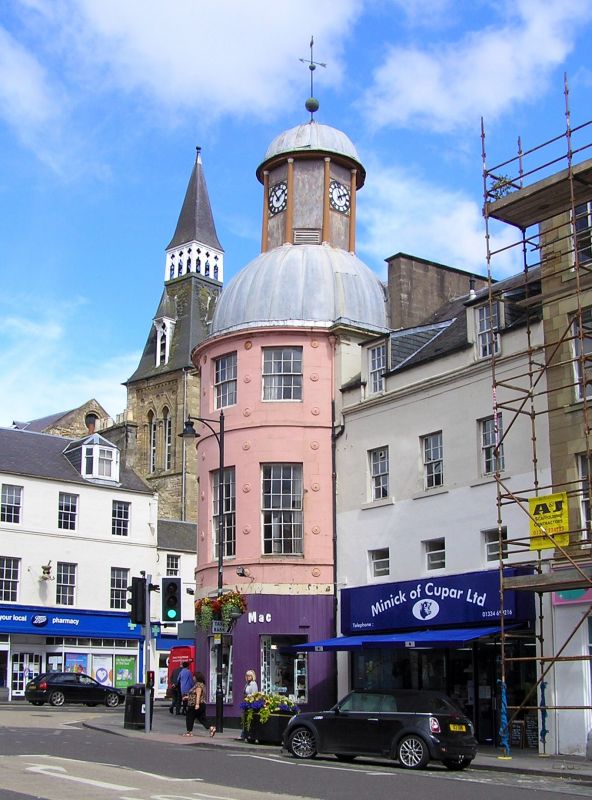 In 1809 Provost John Ferguson (a local banker) bought Balgarive House which lay on the E of the Cross for the purpose of forming a new street. To accomplish this he straightened the course of the Eden and in order to secure proper access Crossgate and Bonnygate bargained with the Town to build a new Town Hall for ?150 and with the Heritors of the County (Trustees of the Fife Hunt) to build new County Rooms free of charge in exchange for the site of the old. The agreement for the former is given in the titles and the negotiations for the latter in the minute book of the Commissioners for Building a New Jail at Cupar (to replace that domolished with the Toolbooth which had been inadequate). From the minutes of 18<> it appears that James Gillespie prepared the designs of the County Rooms agreed to by the County but considerable discussion took place as to whether they should be on the north or the south side of the street. Gillespie probably prepared a design for the whole street but this was considerably varied in execution. The jail was to have closed the E. vista of the street where the War Memorial now, but in the end was built S of the Eden. Wood's map suggests that Hutchison had taken the whole of the N side speculatively; from a schedule of 1835 he appears to have had several of the S side titles in his possession as well; this seems to have been built on a consistent scheme probably by Gillespie but with detail amendments by Hutchison. The County Rooms were built as part of the Tontine Tavern and following Ferguson's Bankruptcy passed into the hands of Andrew Christie and other subscribers, in 1817. In 1821 they became the property of the Trustees the Fife Hunt. See also historical notes and reminiscences of Cupar.