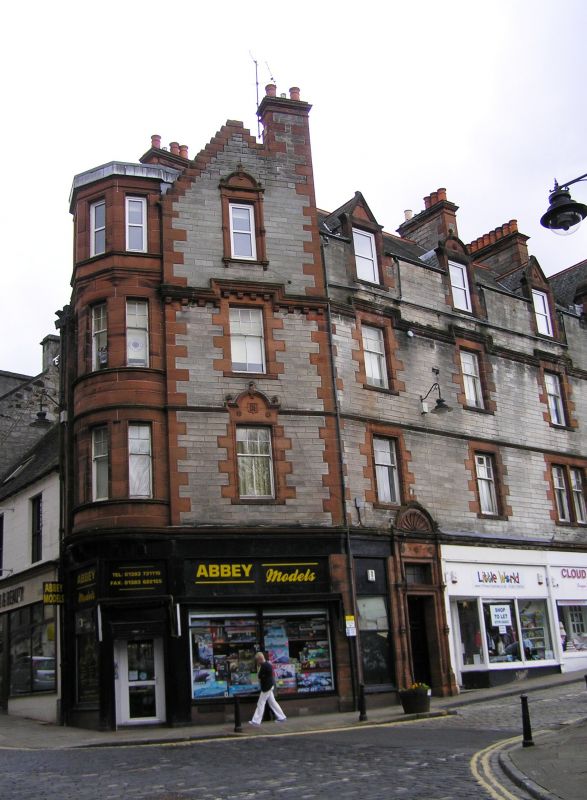 S (PRINCIPAL) ELEVATION: tenement entrances to Nos 4 and 16; both with 6-panel timber doors. Late 20th century shopfronts in between and to either side. Outer left bay is canted at ground floor; 3-storey ashlar turret above; circular-plan with octagonal upper stage; 3 narrow windows with moulded surrounds to each floor; band courses across cills and above lintels. 2nd bay set slightly at an angle to remaining bays. Crow-stepped gable to this and 6th bay; that to 6th bay has flanking corbelled turrets with octagonal upper stages and octagonal domed roofs surmounted by coronet finials. Regular fenestration apart from to 6th bay and flanking bays; 6th bay has pair of windows to 1st and 2nd floors; flanking bays have 2-light mullion window to 1st floor. Semicircular pediments with motifs including shield bearing architect's initials intertwined to 1st floor windows of 2nd and 6th bays; flanking crocket finials and one at apex. brackets to 2nd floor band course and pilastered attic window with finialled semicircular pediment to 2nd bay. Apart from to bays with crow-stepped gables, attic windows are dormers; mostly with carved motifs and finials to pediments.