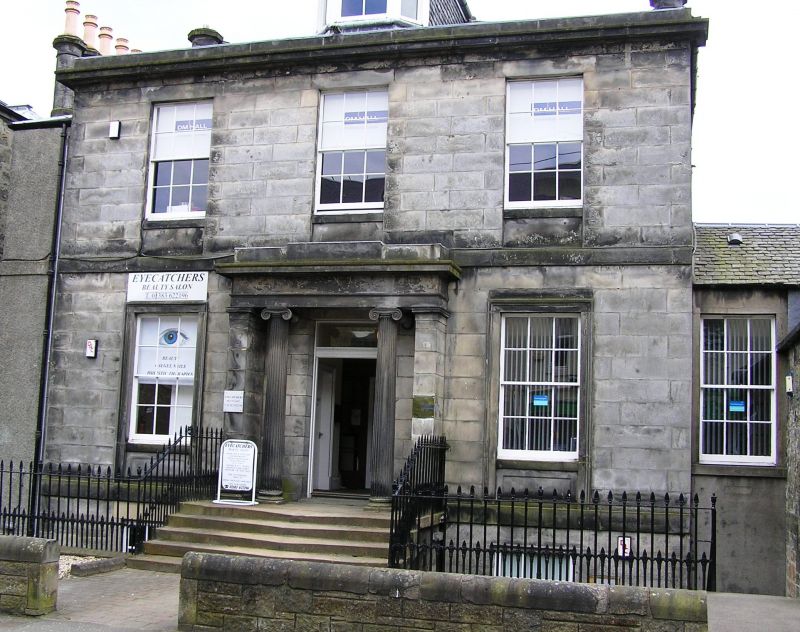 N (PRINCIPAL) ELEVATION: steps up to central entrance with shallow porch; entablature supported on short walls terminating as pilasters to either side and pair of Ionic columns in between; 6-panel timber door with rectangular fanlight. Window above and one to either side to each floor. Central entrance to basement; timber door. Polygonal piended dormer to centre. Cast-iron railings with fleur-de-lys and spearhead finials to either side of steps to main entrance and along street in front of basement. Shallow harled extension set back slightly to left. Single storey wing adjoins to right; single bay set back slightly; wing projects to outer right; 3-light mullioned window to former entrance to carriage drive; entrance to left return.

Two blocked entrances in the cellars of No 1 Canmore Street are thought to lead to a buried medieval passageway, or vennel, which may extend in an easterly direction as far as No 29 Canmore Street. Little detailed evidence is currently available, but there may be two distinct underground areas, known as 'Between the Wa's' and 'The King's Sewer'. The structure is understood to follow a course which lies underneath the properties at Nos 1, 7, 25, 27 and 29 Canmore Street (see separate listings). There is also a stretch of abbey precinct wall (between Nos 21 and 25 Canmore Street) which is a scheduled monument.