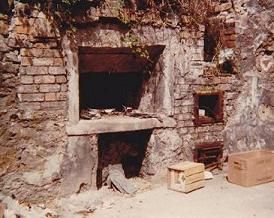 A new oven and stables were built in September 1909 for Alex Seath; it is likely that the oven was built to this design to allow a good flow of hot air from the adjacent furnace although owing to naked flame entering from the right, the bake needed to be rotated to ensure even cooking. This is the only remaining oven of its kind in Kirkcaldy.

Circa 1835 a Mr Thomson moved to William Beveridge's baking premises at 309 High Street, operating from premises in Elder's Brae to the rear of the current shop; Pigot mentions the same property in 1837 as consisting of dwelling house, shop and bake-house, used as a bakery he says "for about the last 40 years". It was advertised for let in 1842 and again in 1844; taken over by Robert Drysdale from 1851-1864, with

2 apprentices in 1851 increasing to 3 men and 1 boy by 1861. Westwood names Drysdale's successor as George Whyte in January 1864 and according to the Fife Advertiser in August 1869, Alexander Ballantyne moved to 311 High Street (Elder's Brae). David Beveridge moved to Elder's Brae during the 1870s where he was a successful baker and confectioner until he retired (1899) in favour of his son Robert. Although Robert died in 1916, the name of Beveridge was linked with the baking firm until much later in the 20th century.