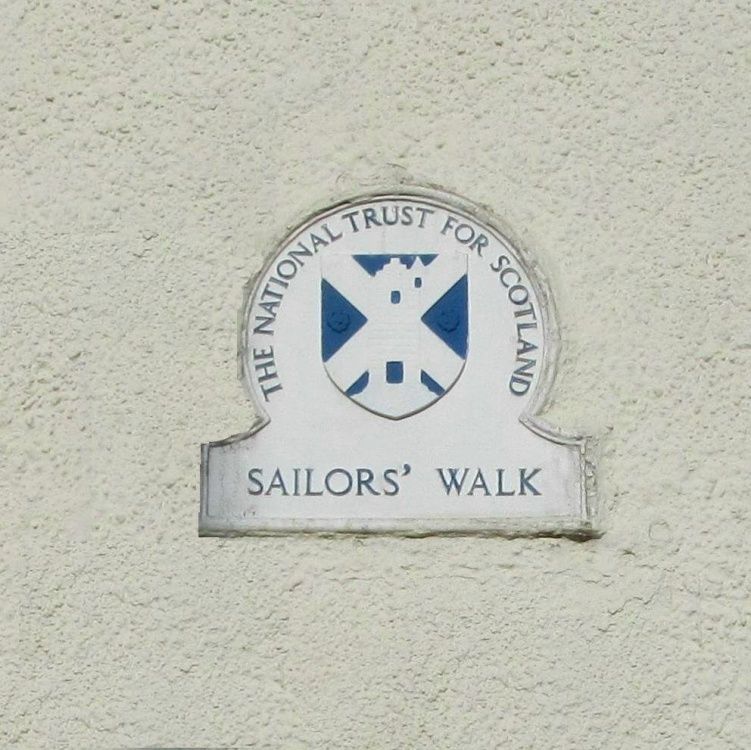 S (HIGH STREET) ELEVATION: advanced crowstepped gable to left of centre with window to left and adjacent modern door to outer left at ground, small stair window to right set high under full-width corbel table and 2-leaf boarded timber door on return to right; window to left at 1st and 2nd floors, further window to each floor on return to right, and small attic window above (slightly off-set to right) in gablehead; stair window to outer right between 1st and 2nd floors and further attic window above. Recessed centre bay with 3 windows at ground, and windows to right and left of centre to each floor above; remains of crowstepped gable to outer right. Ground floor of further advanced gabled bay to right with step down to 2-leaf boarded timber door to centre, flanking windows and chamfered corner to outer right; 3 windows each to 1st and 2nd floors with 2nd floor cill course; canon water spout to outer left and further small attic windows to right and left above.

E (MALCOLM'S WYND) ELEVATION: asymmetrical fenestration including step up to low timber door to right of centre with corbelled stair to left and above.

W ELEVATION: slightly advanced gable to right of centre with stair window to right at 1st floor and to left at 2nd; corbelling (evidence of stair) to outer right; recessed blocked doorway to left with 2 small windows each to ground and 1st floor, and further window to 2nd floor beyond to left.

INTERIOR: The Customs House: No 449 (book shop) with steps down to low-ceilinged room with exposed beams, large corniced stone fireplace and small rooms to rear (that to NW with blocked window to N). Turnpike stair to E leading to No 451 (1st floor), room to S with painted ceiling (probably early 17th century), boards with barely visible arabesques, bird and animal heads on boards, and religious texts including "I will pay my dows unto the Lord" on beams (see Notes); W wall with roll-moulded and corniced stone fireplace with carved frieze, eroded initials "BW" and dated 1676, further stone (lintel?) above; carved and painted stone panel with arms of Charles II (see Notes). Room to rear with moulded cornice, timber panelling and moulded fireplace. No 453 (2nd floor) with corbelling and low, boarded timber door with iron hinges, small roll-moulded stone fireplace.

Reputedly the oldest building in Kirkcaldy with a house recorded on this site in 1460. Sailor's Walk, possibly originated as two dwellings of wealthy merchants or shipowners and was due for demolition in the late 1940s, but was taken over by the National Trust for Scotland and restored in the 1950s with additional funding from the Historic Buildings Council and public appeal. A fire (started by vandals) in 1994 caused charring and discoloration of the 1st floor painted ceiling.

At the time of The Inventory, the western house was derelict and the more easterly had tabled skews with scrolled skewputts, and two string courses crossed the gable. The panel bearing the Arms of Charles II was originally sited on the east elevation and is dated either 1662 (when Charles confirmed the Royal Charter of the town) or 1682. The principal room of the west house (with plasterwork decoration) has been known as 'The Queen Mary Room', possibly connected with Mary of Guise. Coming into single ownership in 1826, Sailor's Walk was known as Oliphant's House until the early 20th century.