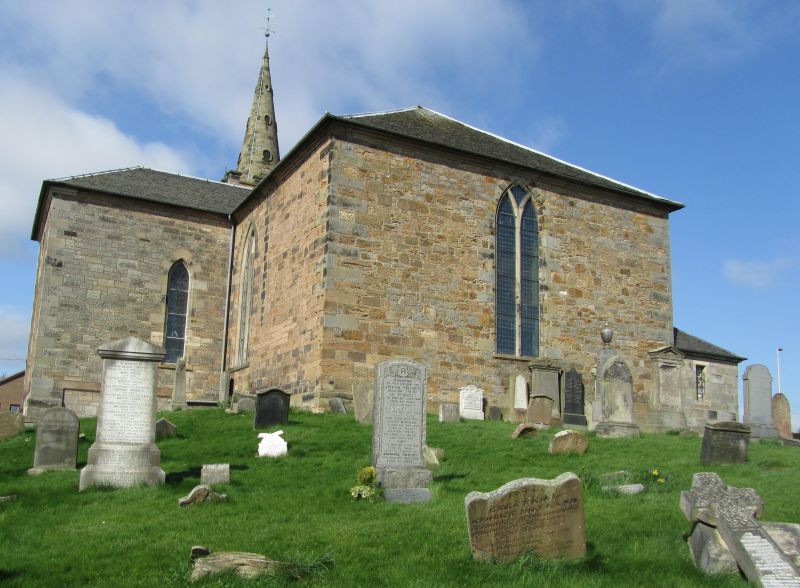 W ELEVATION: advanced tower (see below) to centre with tall window to flanking recessed faces; low catslide-roofed bay with crenellated eaves in re-entrant angle to left with window over basement door, and tiny window to right with further door to left on return to left.

S ELEVATION: later projecting bay to centre with 2 windows at raised basement, lancet to centre above with glazed oculus over, further lancet to each return and traceried window to recessed flanking bays.

Ecclesiastical building in use as such. Abbotshall was created a separate parish in 1650, with Patrick Wemyss as the first minister of Abbotshall Church. The parish was incorporated with Kirkcaldy Burgh in 1876. A new organ chamber, with organ by J J Binns, was installed in 1898. Raith Parish Church, stemming from a Mission church of Abbotshall, rejoined the mother church in 1964, at which time the stained glass windows in the chancel area were removed from the decommissioned Raith Church. Walker & Pride's early 1970s interior modernisation included connecting the older separate Linktown tradesmen's lofts of Hammermen's Loft (E), Weavers (W), and the Raith gallery (N) around a new raised chancel; the entrance was relocated and glass screen inserted.