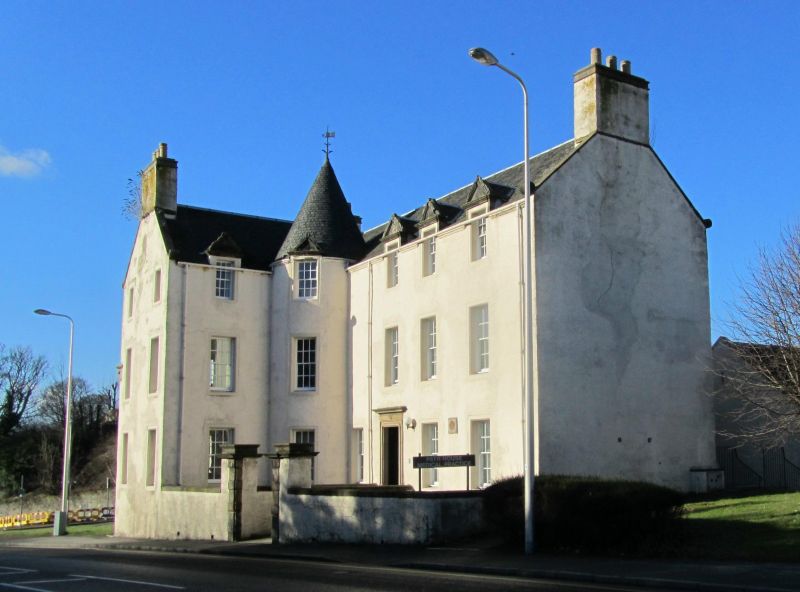 S (PRINCIPAL) ELEVATION: 4-bay recessed face with dwarf walls flanking path to ground floor with corniced and pedimented roll-moulded doorcase with monogrammed frieze to left of centre, 2 windows to right and further window to left; regular fenestration to bays 2, 3 and 4 at 1st and 2nd floor, the latter with monogrammed dormer gableheads breaking eaves, that to outer right dated. Advanced gable to left of centre with 2 windows to each floor and broad gablehead stack; further window to each floor on return to right, that to 2nd floor as above. Finialled, conical-roofed round stair tower in re-entrant angle with window to each floor, that to 2nd floor pedimented.

W ELEVATION: chimney gable to left of centre; 3 windows to each floor, those to 2nd floor centre and left small with chimney gable above, and that to right breaking eaves as above. Wall-mounted angle sundial to outer right at 1st floor.

Formerly listed as Dunnikier House, the name was changed to Path House after the Fife Health Board restoration of 1979, which received both a Saltire Society commendation and a Kirkcaldy Civic Trust award, and involved "total internal replanning and external masonry restoration". The Dunnikier Estate passed from the Watson to the Oswald family, soon after the marriage of John Watson to Euphan Orrock, about the year 1692 when this house (formerly Dunnikier) was built; the monograms bear a variety of 'IW's and 'EO's. The present Dunnikier House (listed separately) situated to the N of Kirkcaldy was built in 1790. The gatepiers and screen wall (and possibly the rear wing and stair tower) date from the early 18th century, and further alterations occurred during renovation in 1891 when it became the manse for Dunnikier Church. MacGibbon & Ross' drawing (prior to the round stairtower) shows a moulded panel over the door and much smaller openings. Late 19th century work presumably done by same architect who built Lodge (to new Dunnikier House) in Hayfield Road.