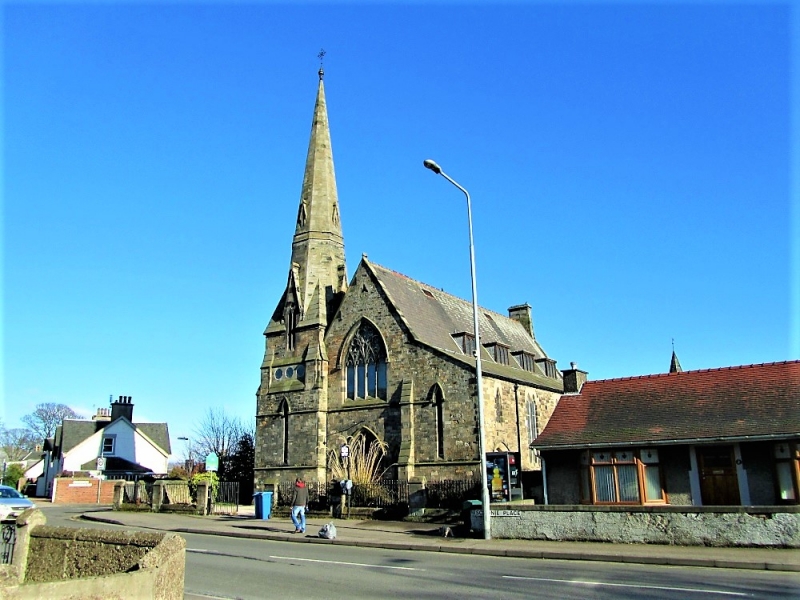 S ELEVATION: mirrors N elevation, but without ramp access, and with bipartite window in lower piended bay to outer left.

E ELEVATION: lower piended bay projecting to ground, with rose window to centre behind and trefoil in gablehead with broad stack.

Ecclesiastical building in use as such. Originally Leven Free Church, but known as the Forman Church, the building was officially opened in December 1861 by Rev Dr Guthrie of Edinburgh. Rev Adam Forman was unable, through ill health, to preach in the new building until March 1862. Substantial donations from John Balfour of Leven Oil Mills and Mr Durie helped toward the building costs of over ?3240. In 1900 Forman United Free Church was formed as a result of the union of Free and United Presbyterian Churches. At this time the building was renovated and clerestorey windows added at a cost of ?572.13s.5d. The pipe organ, designed by Mr Kerr, architect from Edinburgh, and given by Mr R B Forman in memory of his parents, was installed in 1911 for the 50th anniversary. In 1957 over ?2000 was spent on moving the organ forward and complete overhauling the instrument with a new console and new electric motor. Today's congregation was formed in 1975 when the Forman and St John's Churches united to form St Andrew's Parish Church. The alabaster Baptismal Font, Communion Table and chairs were all gifts of the Forman family. The Bain Hall, built at a cost of ?830, was the gift of David Bain, draper in Leven.