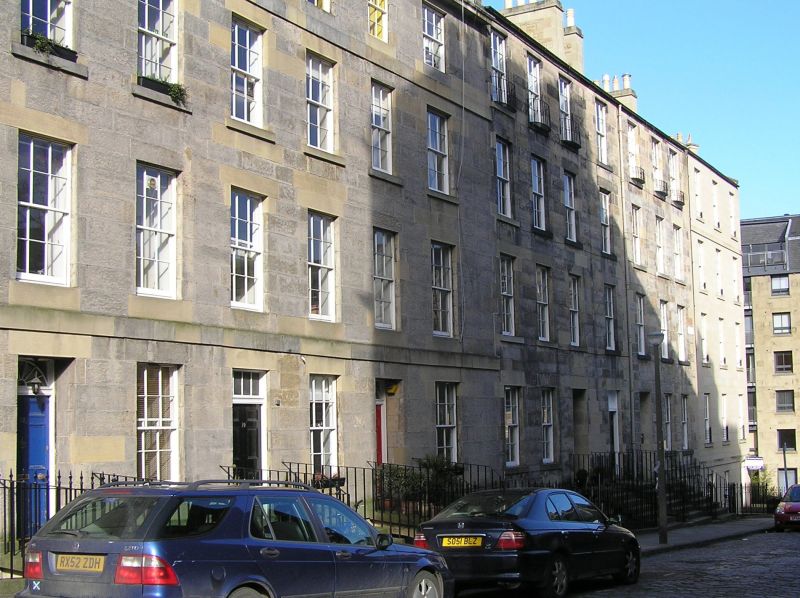 This double tenement block is a good example of early 19th century tenement design in Edinburgh. It also has streetscape and historical value as an element of the Gayfield estate development. The relative simplicity of detailing, compared to the adjoining terrace and tenement block to the left (also by Cairncross; separately listed), is reflective of the building's position on the road running out of the square, which causes it to be hidden from view when looking at the square from Leith Walk. The modern building to the right replaces a contemporaneous building of 5 absolutely plain storeys which fell into disrepair and was demolished in the 1970s. 21-23 Gayfield Square also has significance as one of the few extant buildings designed by Cairncross, formerly a pupil or assistant of Robert Adam, for whom he was clerk of works at several prestigious projects including Culzean Castle and the Old Quad, Edinburgh University.

21-23 Gayfield Square forms part of the Gayfield Estate, so named because it stands on the former grounds of Gayfield House (East London Street; 1763-5, still extant; separately listed Category A). These lands were feued by the solicitor James Jollie from 1785. Building began on either side of the drive to the house, with James Begg's magnificent tenement building to the NE and villas to the SW. These developments began to establish the form Gayfield Square, which forms the heart of the estate. It was part of Jollie's plan from the beginning that this should be so; in January 1783 he advertised that the Gayfield grounds were to be feued for building purposes 'according to a plan.' His advertisment promised prospective feuars 'remarkably pleasant' rustic situation and 'uncommonly beautiful views' in addition to 'the privilege of the area of the square'. Sasines record that '..the area of Gayfield Place [is] to remain an open space for all time coming.'

By the first few years of the 19th century, Jollie had employed Cairncross to prepare plans and elevations for buildings on plots yet to be feued on the NW and NE sides of Gayfield Place, and also possibly for Union Place. There is some evidence to suggest that John Fraser, a builder, bought and built on all the feus on this NW side.