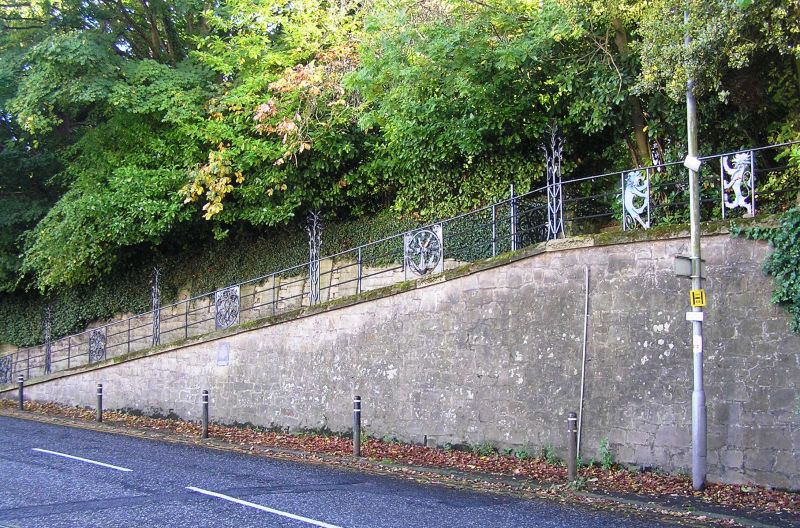 Phoebe Traquair and Frank C Mears, executed by Thomas Hadden, 1924. Wrought-iron railings with naturalistic foliate decoration up ramp leading to 25 Bridge Road, with 2 waist-high gates, and another similar gate onto the lane between Woodhall Road and Bridge Road. Gate at bottom of ramp with tear-shaped rondel at top to centre containing thistle and flower bunch, decorative grid below and decorative scrolls to sides. Semicircular arch over gate with bunch of flowers forming central finial, and realisic birds perched on scrolls to each side. Plain railings linking 4 large square panels, each with thistle or flower motif in central rondel; stamped animal figures to spandrels. The lowest thistle panel is inscribed with the names of Phoebe Traquair, Thomas Hadden, and the initials of Walter Blaikie and his 2 daughters (see Notes). 2 smaller rectangular panels at top of ramp containing lions rampant. 4 tall, narrow sections between panels, rising above railings and surmounted by lilies. Gate near top of ramp with flat interlaced pattern, possibly a monogram. Similar gate to lane between Woodhall Road and Bridge Road.

The house at 25 Bridge road is not included in this list. These railings were designed by Phoebe Traquair with the help of Frank Mears in the early 1920s. They were commisioned by Walter Biggar Blaikie, who lived at 25 Bridge Road, and was a good friend of Phoebe Traquair. Blaikie was the proprietor of a printing firm, J A Constable, and had known Phoebe Traquair since 1889, when she had done the illustrations of a book that he published.

Phoebe Traquair (1852-1936) was one of the leading artists of the Arts and Crafts movement in Scotland, and the first women to be elected an honourable member of the Royal Scottish Academy. She worked in numerous different fields, including embroidery, book illustration, book binding, enameling, and mural painting. She is most famous for her murals in the mortuary chapel at the Royal Hospital for Sick Children in Edinburgh, and at the Catholic Apostolic Church in Mansfield place, Edinburgh. She also produced the illustrations for "Sonnets From The Portuguese" by Elizabeth Barret Browning, and "The Blessed Damozel" and "The House of Life" by Rosetti. Although Phoebe Traquair produced a number of small pieces of metal work (some of which are on display at the Museum of Scotland), she is only known to have designed one other piece of wrought-iron, a flat-work image of St Michael, for St Michael?s church in Bracknell (Berkshire). These railings are therefore a unique and extremely important example of her work.

Frank Mears (1880-1953) was an architect who had studied at Edinburgh School of Applied Art, and had been apprenticed to Lorimer. Before 1914 he had worked with Phoebe Traquair?s son Ramsay Traquair, and had designed ironwork for the First Church of Christ Scientist (Inverleith Terrace, Edinburgh), which was built by Ramsay Traquair in 1910. He presumably helped Phoebe Traquair design the railings, since she had no previous experience of working with wrought-iron. Frank Mears was the son-in-law of Patrick Geddes, and was greatly influenced by his theories. He was the leading planner in Scotland in the 1930s and 1940s, and also carried out a lot of conservation work, including Huntly House and Gladstone?s Land on the Royal Mile.

Thomas Hadden (1871-1940) was the leading manufacturer of wrought-iron work in Scotland in the early part of the twentieth century. He set up his firm in 1901, and produced numerous pieces of wrought-iron work, including gates, screens, fire irons, door furniture, shop signs, weather vanes, and even decorative bootscrapers. Much of his work was designed by him, but he also worked to the designs of others, most famously with Robert Lorimer. After his retirement his firm was carried on by his nephew Robert Hadden, until the early 1970s. Another example of his work in Colinton are the gates at Cottage Homes on Redford Road.

The railings are currently (2003) in a poor condition, and some of the details are badly corroded. Two photographs in the Thomas Hadden collection at the Royal Scottish Museum show sections of the railings in their original condition. One photograph shows the thistle panel, which is at the lowest end of the ramp. The lower spandrels contained scrolls, inscribed with the initials of Walter Blaikie and his wife: WBB 1924 and MB IAB. The lower part of the hoop of the rondel was inscribed PA TRAQUAIR ET FC MEARS DESIG ~ THOS HADDEN FECIT. The writing is still visible, but too faint to be legible.