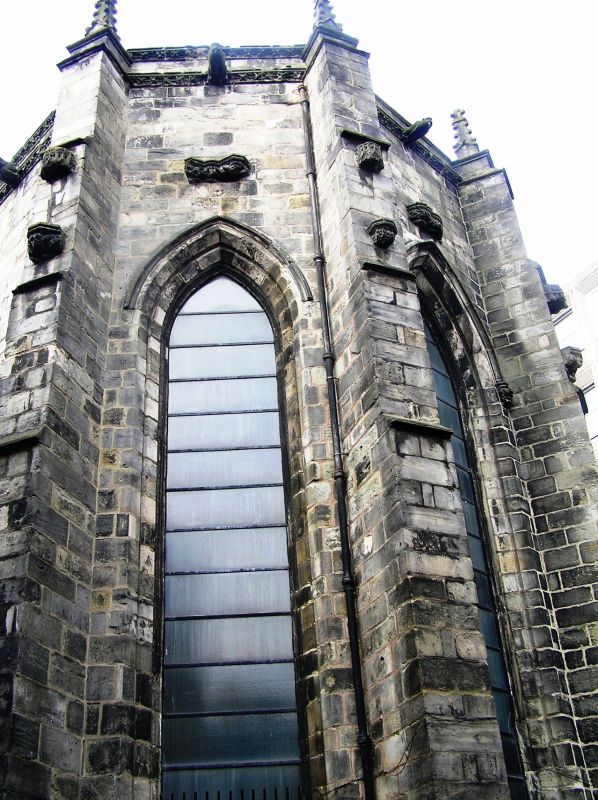 De-scheduled 12.12.1997. Ecclesiastical building no longer in use as such. Mary of Gueldres founded the collegiate church as a memorial to her husband, King James II, who was killed at the siege of Roxburgh in 1460. James Kennedy, Bishop of St Andrews, confirmed the foundation on April 1st 1462. The first provost of this collegiate church was Sir Edward Bonkil (or Boncle) and Trinity also supported 'eight prebedaries, and two singing boys; in addition to which there was attached to the foundation an hospital for thirteen poor bedemen, who were bound to pray for the soul of the foundress, her royal consort, and all their kin' (Wilson pp239-240).

After Mary of Gueldres's death, on 16th November 1463, the pace of building slowed dramatically and the church, comprising a choir, transepts and a partially constructed low saddleback crossing tower, was never fully completed. The original site of Trinity College Church and Hospital lay below Calton Hill at the foot of the old Leith Wynd. To make way for the expansion of Waverley Station, all the buildings were demolished in 1848 under the supervision of David Bryce, and the numbered stones were stored on Calton Hill., 'not withstanding the strongest remonstrances against so irreverent and sacrilegious an act' (Wilson p244). A caloptype by David Octavius Hill (Holmes p18) taken shortly before demolition of the church shows the area where the hospital stood, apparently being used as a stone-mason's yard. Rebuilding of the choir and apse, without aisles, in the present site began in 1872 and the architect, John Lessels, was able to incorporate about a third of the original stones. Some of these numbered stones can still be seen in the walls however many of the stones disappeared before they could be reused. The religious and political instability of the Reformation period during the 16th century meant that churches were frequently the focus of violence and possibly accounts for the fact that the traceried windows in the apse do not all remain intact today.

The jambs of the chimneypiece on the inside of the W gable are thought to have come from the house of one John Hope which stood between Chalmer's and Barringer's Closes. This house was being demolished at the time of building the new church and the sculpture on capitals contains the following domestic scenes: 'There is, first, a youth in the guise of a wanderer, with his wallet by his side, sitting on a bank talking with a young shepherdess, and between them is a sporting lamb. In the second the pair have got closer together, and sit hand in hand. The third scene represents a family group; the parents are seated, and are evidently endeavouring to pacify a crying child; while the fourth scene shows each with a child in arms' (MacGibbon and Ross C & D Arch. pp490-1). A comparable example of such a chimneypiece is at the Palace of Linlithgow in the south range and another similar fragment exists at the Bishop's Palace at Dunblane.

The new church extension by Lessels was added in 1872-77 but this Victorian addition was demolished in 1964 and the N arcade filled in. The stone fragments salvaged from the old building set within the present curtilage, the decoration on the interior of the apse and the apse itself, provide a glimpse of the very fine quality of the 15th century Scottish middle pointed or decorated Gothic architecture that was once exemplified by the whole of Trinity College Church. Other fragments of carved stone from Trinity College Church can be found at Lady Stair's House Museum and Craigcook Castle.

The Trinity altarpiece of the late 1470s by Hugo van der Goes, known as the Trinity Panels, is a diptych painted on both sides commissioned by Edward Bonkil. The panels depict the Holy Trinity; Bonkil and two angels; James III, King of Scots and his son James (?) and St Andrew; Margaret of Denmark, Queen of Scots and St George (?). Originally the piece may have been a triptych, the centre panel probably depicting the Virgin and Child and presumably destroyed during the Reformation. The panels, displayed on long-term loan to the National Gallery of Scotland, are described as 'the most important surviving altarpiece ever to have been commissioned for Scotland.' (NGS p64)