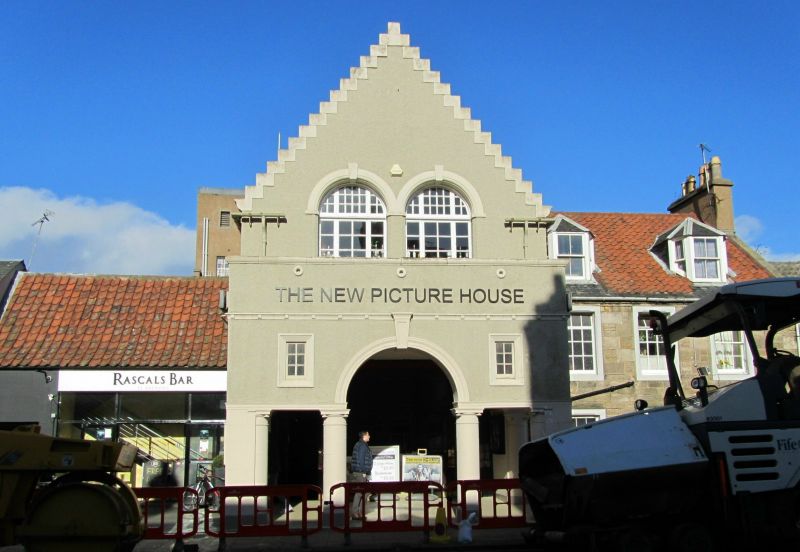 The New Picture House is a little-altered cinema in an unusual, and possibly unique, marriage of styles created to sit within a traditional St Andrews streetscape without compromising the comfort and technical excellence expected by the discerning cinema-going public of the inter-war period which became known as "the long weekend" (McKean, p61). The Classical detailing of the loggia is reflected in the very fine auditorium, while the Art Deco modernity, lending massing and scale to the structure, is discreetly positioned but obvious to those who wish to see, behind the pantiles and crowsteps. Watercolour panels in the interior depict local scenes, such as the Cathedral and Castle as well as the cinema itself. St Andrews-based artist Ada Hill Walker (1879-1955) was the youngest sister of William Hill Walker of Walker & Pride architects. The emphasis at the New Picture House is on distinct local identity and this is very rare in cinema design of the 1930s.

The New Picture House was so named owing to the existence in St Andrews of another cinema, The Cinema House, which had opened in 1913 and was demolished in the early 1980s. Local architects James Gillespie and Scott, based at 4 Queens Gardens in St Andrews, worked prolifically in the area and their work characteristically takes note of the area's vernacular character. When first built, The New Picture House had a first floor café which is now (2007) sublet as a bar/restaurant and accessed from a new entrance to the west of the cinema entrance. Other changes include the addition a of second screen in 1980, and third screen in 2001. In 2005 the balcony was extended to accommodate luxury seating, and the two watercolour panels from the original balcony front were framed and hung elsewhere within the building.

Assessed as part of the Cinema Thematic Study 2007-08.