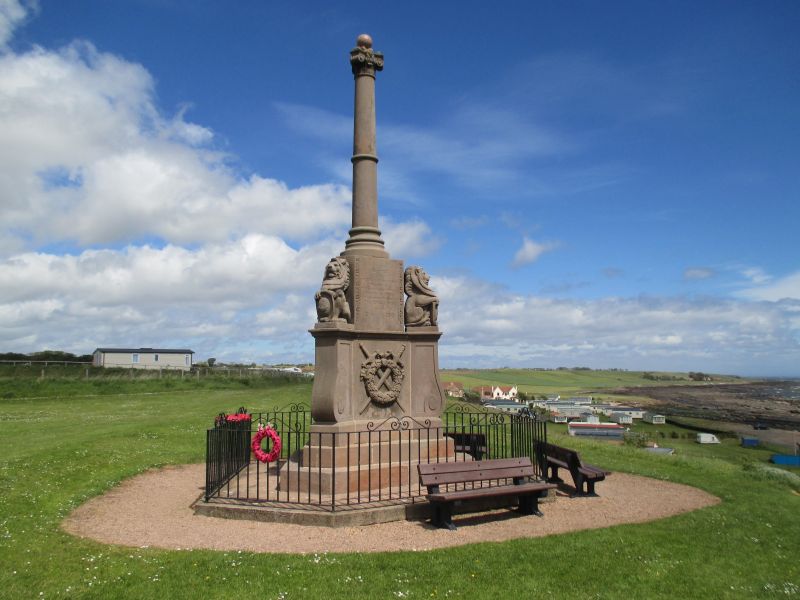 MEMORIAL: triple-stepped base giving way to 3-sided 2-stage section. Lower stage with 3 panels in low relief depicting sailor, soldier and wreath with crossed swords; upper stage with 3 panels naming fallen and dedicatory panel, "ERECTED IN PROUD AND REVERENT MEMORY OF THOSE CONNECTED WITH THE PARISH OF KILRENNY WHO LAID DOWN THEIR LIVES IN THE GREAT WAR 1914 1918".

Unveiled on 12 March 1922, Kilrenny War Memorial is an important piece of sculpture notable for its unusual form and exceptional carving. It is also distinguished by its remote location which gives it a distinctive landscape prominence. It forms a significant part of the social history of the area.

The carved panels and lions with shields are of good quality and firmly anchor the Memorial to its locality. The lions hold shields depicting the Kilrenny Burgh Coat of Arms and also a plough and steam drifter to represent the local fishing and farming communities. War Memorials are more commonly found in places of worship or in central civic locations and the remoteness of this example, located between the two communities it represents, sets it apart and gives it an unusual landscape presence.

Alexander Murdoch was a local architectural and monumental sculptor who worked from Abbotshall Road, Kirkcaldy.