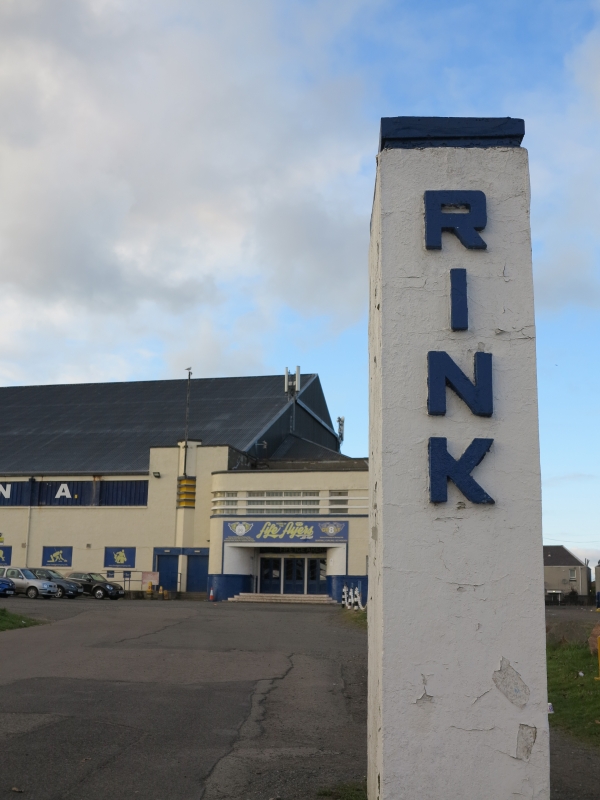 The Fife Ice Arena (1937-8) is an extremely rare surviving example of a purpose-built indoor ice rink of the inter-war period, featuring a distinctive streamlined 1930s Art Deco entrance façade. Formerly known as the Kirkcaldy Ice Rink, the building is the oldest operational ice rink in Scotland.

Of twenty seven ice rinks known to have been constructed in the UK between 1927-39, four survive. Murrayfield Ice Rink, 1938-9 (see separate listing) is in Edinburgh, with the remaining two in London.

The Kirkcaldy rink was completed in 1938 at a cost of 37,000 pounds. Kirkcaldy-based architects, William Williamson and Henry Hubbard, were employed to create an enticing Art Deco style entrance bay to what was ostensibly a large industrial shed covering both the rink and the mechanical plant needed to freeze the ice. The steel roof has a span of 145 feet without inner supports, making it the widest construction of its kind in Scotland at the time. The partnership carried out numerous commissions in the local area between the wars.

The interior also retains elements of interest including an original bar area with a rounded entrance façade facing the rink, partitioned doors and room dividers, and a built-in timber-panelled bar. Parts of the interior were remodelled in 2011 including the replacing on the original timber seating with plastic seats from Ibrox stadium and the original analogue hockey clock was replaced with an electronic scoreboard from Cardiff.

Indoor ice rinks first emerged in Canada in the 1870s when timber sheds were erected over naturally occurring outdoor ice to prevent the surface from being covered with further snowfall. Mechanically frozen artificial ice was patented in London in 1870 by Dr John Gamgee (1831-94). His "Glycarium" (1876) was the first building designed as an ice rink.

It is thought that Britain's first skating club was formed in Edinburgh possibly as early as 1642. The first indoor ice rink in Glasgow made use of an 1875 circular building, converted to an ice rink in 1895 by the architect James Miller. It ran for three years before it was concluded that a circular plan was not ideal for either curling or skating. Scotland's first purpose-built ice rink was put up in 1907 at Crossmyloof. Renowned for its advanced construction, it was a forerunner to the internationally important Manchester Ice Palace of 1910.

The 1920s and 30s saw an increase in the number of rinks due to improvements in refrigeration efficiency and interest in the game of ice hockey. Inter-war rinks tended to run for short periods before the financial pressure of maintaining buildings of this type caused them to close. Most of those built in Scotland in this period, including Perth (1936), Dunfermline (1939), Dundee (1938) and Ayr Ice Rink (1938), were demolished in the 1980s and 90s.

Listed as part of the sporting buildings thematic study (2012-13).