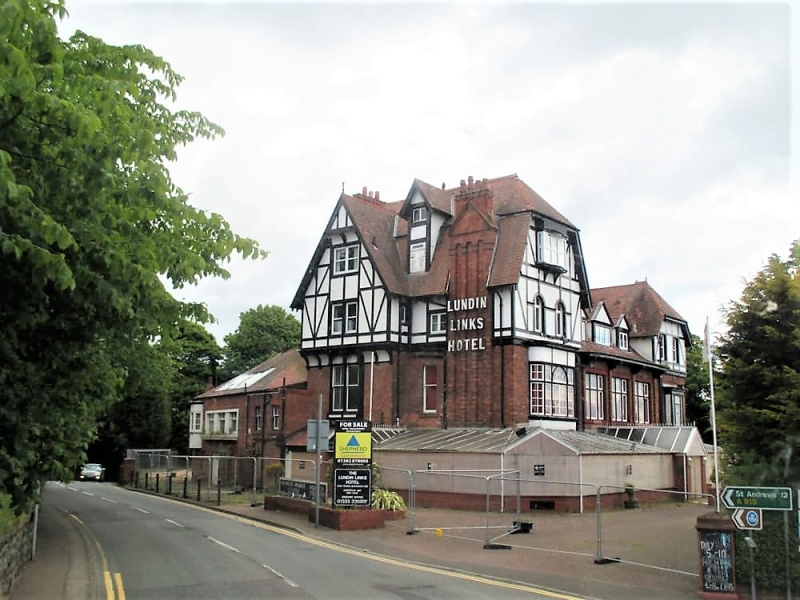 The Lundin Links Hotel is a large and well-detailed example of Tudor-Revival architecture, occupying a prominent site on the scenic coast road through the East Neuk of Fife. The building uses a wide range of architectural elements including oriel windows, pedimented dormers and gablets, steeply-pitched roofs and jerkin-headed gables to create a unified whole. A strong verticality characterises the principal facades, accentuated by the tall pilastered wallhead chimney. The building is designed to be seen from the corner so that both south and west elevations are visible from the approach road to the west. Dominating the centre of the village, it is a key landmark building in the area.

The Tudor-Revival, or Neo-Tudor, style was first popularised in domestic architecture in England during the latter half of the 19th century, with notable early examples by eminent architects of the period including Norman Shaw and George Devey. Its use is relatively uncommon in Scotland and is more likely to be found in smaller coastal resorts rather than large towns and cities. The use of dressed red brick and red rosemary roof tiles are also typical of the Art and Crafts period.

Peter L B Henderson (b. 1848) was primarily a brewers and licensed trade architect from Edinburgh with fourteen major clients in that field. Some of his work, such as Mackay's Brewery St Leonards (demolished), the former Meat Market in Fountainbridge, the Central Bar on Leith Walk and a number of Edinburgh tenement buildings (see separate listings) all have considerable merit. Henderson was captain of the Lundin Links Golf Club at the time the hotel was built and was also the architect of the red-tiled clubhouse at Lundin's 18-hole course.

The interior includes large round-arch doorways to ground floor, plasterwork cornincing, clay floor tiles and an oak-panelled bar room, all representative of the building date and adding to the architectural interest. The hotel has twenty one bedrooms and three function rooms. The largest features decorative panelling and runs the length of the south elevation at first floor level with three large tripartite windows and a large projecting window with bowed corner angles emphasising the functional significance of this room on the exterior design.

The bar area was remodelled in 1935 with much original fabric including the bar counter and rear gantry retained. Other more recent internal alterations to the building include re-location of the kitchen from first to ground floor and the remodelling of the Cameron Room to provide modern conference facilities.

The second Edition Ordnance Survey map of 1895 shows the footprint of a former L-plan Coaching Inn at the site, located slightly to the west on the line of the road. The earlier building was probably of 18th century origin and it is also understood that an inn has operated in some form or another at this location since the 17th century. The third Edition Ordnance Survey Map of 1919-21 shows that the single-storey managers house and adjoining cottage addition in red brick were extant to the rear of the property at that date. The lean-to timber conservatory with brick base-course was added in the late 1990s.